Andy Murray was playing in his second final of 2017 after losing to Novak Djokovic in nearby Doha during the opening week of the season in January. 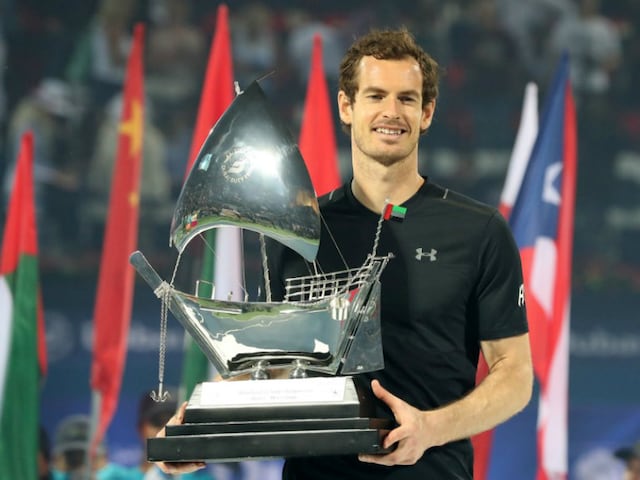 Andy Murray clinched his first title of the year and 45th of his career as he dominated Spain's Fernando Verdasco 6-3, 6-2 to win the Dubai Tennis Championships on Saturday. World number one Murray claimed the Dubai title for the first time after losing the final five years ago to Roger Federer. The Scot finished the job in just 73 minutes on the first of three match points, an untouchable service winner. Murray improved his record over 35th-ranked left-hander Verdasco to 13 wins and just one loss.

"It's obviously nice to finally win here," said the top seed. "It feels great to take the trophy for the first time.

"I played a good match today. I had a bit of a slow start, but we've had a lot of late nights this week. But once I got going, I was moving well and finished strong."

He was playing in his second final of 2017 after losing to Novak Djokovic in nearby Doha during the opening week of the season in January.

The first three games of the contest featured breaks of serve before Murray steadied, breaking for 5-3 and taking the opening set.

In the second, Murray earned a 2-1 lead as he eased to victory.

Murray now makes the long flight halfway around the world to Los Angeles to prepare for the start of the Indian Wells Masters.

His win on Saturday allowed Murray to become the first British champion in the 25-year history of the Dubai tournament.

Comments
Topics mentioned in this article
Andy Murray Fernando Verdasco Tennis
Get the latest Cricket news, check out the India cricket schedule, Cricket live score . Like us on Facebook or follow us on Twitter for more sports updates. You can also download the NDTV Cricket app for Android or iOS.