The 25-year-old wild card entrant Petkovic was ruthless in hammering Bratchikova 6-2 6-0 in just under an hour while fifth seed 42-year-old Kimiko got the better of her much younger compatriot Misaki Doi 6-1 6-4 in the quarter-finals.

Petkovic was on the top of her game from the start while Bratchikova erratic as she began the match with three unforced errors and went on to drop her serve in the first game.

The trend continued through out the encounter with the German breaking Bratchikova again in the fifth game to pocket the set. The second set was one-sided affair with Petkovic toying with her opponent and did not lose a game in the bargain.

"I was very focused from the start. Nina is a very good player and I knew that I cannot afford to relax against her. I am very happy the way I played today," said Petkovic, who is making a comeback to competitive tennis after a long injury lay-off.

She will now face seventh seed Elina Svitolina of Ukraine, who reached the last four after Thailand's Luksika Kumkhum retired due to injury with the score reading 6-7 (3), 4-1 in the other quarterfinal.

In the day's other match, veteran Date-Krumm gave a lesson or two to her younger compatriot as she found difficult angles and played on her opponents nerves to win in one hour 16 minutes. 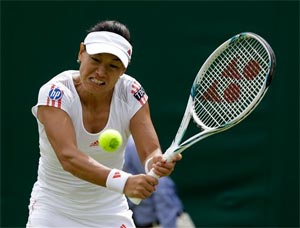 Date-Krumm raced through the first set and when she broke Moi in the third game. However, Doi broke back immediately and for a brief period matched Date-Krumm stroke for stroke.

But the youngster crumbled under pressure while serving to save the match in the 10th game as she made three unforced errors to hand the quarterfinal to the opponent.

Date-Krumm was relieved that the match ended early.

"I was playing third match in 24 hours and I was getting tired. But thankfully it was over in two sets," she added.

Meanwhile, 35-year old Tamarine Tanasugarn defeated 16-year-old Donna Vekic to book her semifinal berth. The eighth seed dominated the proceedings during the one and half hour encounter to win 6-2 6-4.

She faces Kimiko Date-Krumm in the last-four stage.

"It took me sometime to settle down against Donna as I was playing her for the first time. But she made a lot of errors and that worked in my favour in the first set," said Tanasugarn after the match.

Speaking about her semifinal clash against 42-year-old Date-Krumm, Tanasugarn said she idolises the Japanese veteran who still has the hunger to give her best on the court.

"We have played four times since she came out of retirement and we had always had close matches. I don't think tomorrow's match will be any different," she added.

Comments
Topics mentioned in this article
Tennis Elina Svitolina Andrea Petkovic Misaki Doi Kimiko Date-Krumm
Get the latest updates on IPL 2021, IPL Points Table , IPL Schedule 2021 , live score . Like us on Facebook or follow us on Twitter for more sports updates. You can also download the NDTV Cricket app for Android or iOS.