After one win and a walk-over, Divij Sharan, Purav Raja in semis in China

The third seeded Indian pair, looking for its second title of the season, carved out a hard fought 4-6, 6-3, 10-7 win over Hsin-Han Lee and Hsien-Yin Peng of Chinese Taipei in the opening round. 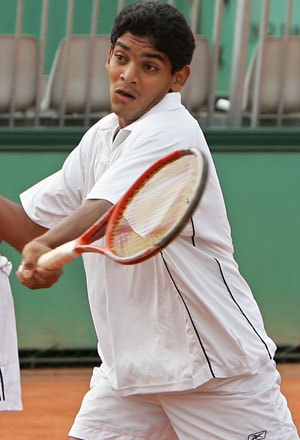 Divij Sharan and Purav Raja came from behind to win the first round and then got a walk over to progress to the semifinal of the USD 125,000 ATP Challenger tournament here.

The third seeded Indian pair, looking for its second title of the season, carved out a hard fought 4-6, 6-3, 10-7 win over Hsin-Han Lee and Hsien-Yin Peng of Chinese Taipei in the opening round.

They were down 0-2 after losing the serve early but bounced back immediately. Again in the ninth game, they surrendered the serve at deuce and went on to hand the set to their rivals.

Shrugging off first set blues, they broke the Taipei players in the very first game and again in the ninth game to draw parity.

They hardly had any trouble in the match tie-breaker and easily romped home.

The Indians were supposed to play Marco Chiudinelli of Switzerland and Tatsuma Ito of Japan in the quarter finals but Ito pulled out due to a broken tooth, so they advanced to the last-four pair stage.

They face the winners of the quarter-final match between second seeded Australian pair of Samuel Groth and John-Patrick Smith and Chinese combo of Xin Gao and Zhe Li.

Comments
Topics mentioned in this article
Tennis Leander Paes Radek Stepanek Daniele Bracciali Marco Chiudinelli Jonathan Erlich Divij Sharan Zhe Li John-Patrick Smith Purav Raja
Get the latest updates on ICC T20 Worldcup 2022 and CWG 2022 check out the Schedule, Live Score and Medals Tally. Like us on Facebook or follow us on Twitter for more sports updates. You can also download the NDTV Cricket app for Android or iOS.