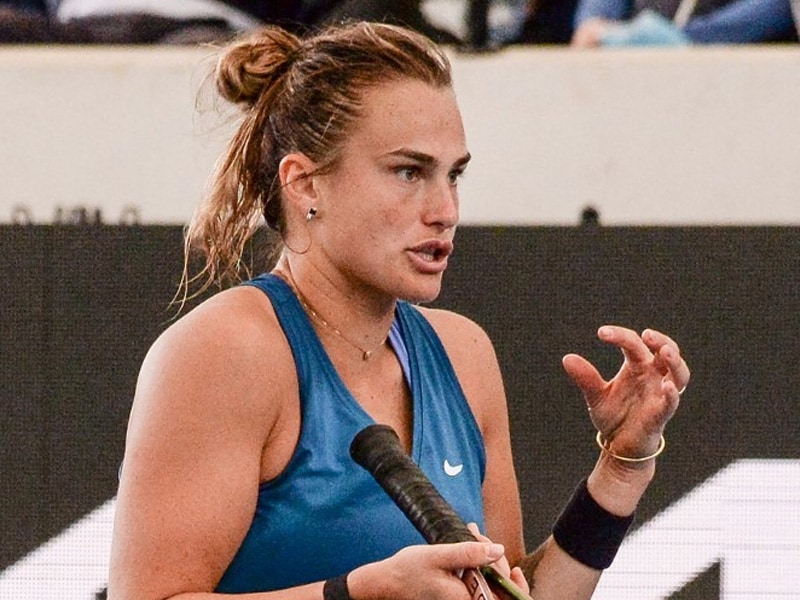 Aryna Sabalenka dished up 21 double faults and was reduced to serving underarm.© AFP

World number two Aryna Sabalenka's Australian Open preparations were in tatters on Tuesday when she self-destructed for the second week in a row and was almost unable to serve at an Adelaide warm-up event. A week after her delivery deserted her at the first of two Adelaide lead-in tournaments, Sabalenka suffered the same fate as she was stunned in three sets by world number 93 Rebecca Peterson 5-7, 6-1, 7-5. Sabalenka dished up 21 double faults and was reduced to serving underarm in the second and third sets in a desperate effort to get the ball into play.

She took so much pace off her first serves that at one stage they were barely clearing the net.

The 23-year-old Belarusian became distressed in the third set and, after being asked by the umpire whether she was all right, broke down in tears during her next service game.

Her only consolation was that she was still hitting her groundstrokes with power and placement, but it was no surprise when she bowed out at the first hurdle.

"That was definitely the weirdest match I've ever played," Swedish qualifier Peterson said. "It was tough staying focused. I know she was struggling a lot.

"I just had to stay in my own world -- it was really difficult."

Comments
Topics mentioned in this article
Aryna Sabalenka Rebecca Peterson Tennis
Get the latest updates on ICC Women's Cricket World Cup 2022 and IPL 2022, check out the Schedule , Live Score and IPL Points Table. Like us on Facebook or follow us on Twitter for more sports updates. You can also download the NDTV Cricket app for Android or iOS.