Watch: Impressed With 11-Year-Old, Rohit Sharma Asks Kid To Bowl To Him In Nets

India captain Rohit Sharma made a young fan's day at the WACA in Perth as he gave the opportunity to a 11-year-old to bowl at him. 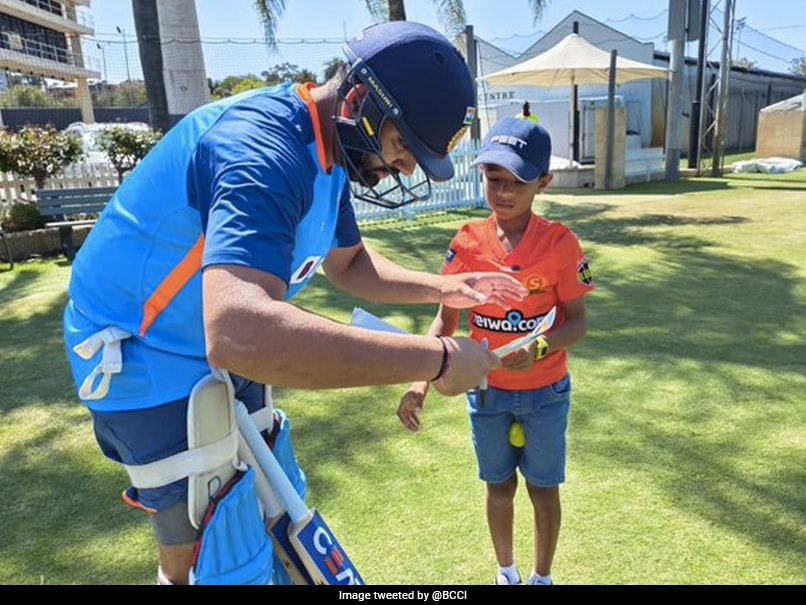 India captain Rohit Sharma made a young fan's day at the WACA in Perth as he gave the opportunity to a 11-year-old to bowl at him. During one of the nets sessions in Perth, Rohit spotted the youngster bowling very well as a part of kids' activity, and realising his potential, he called Drushil Chauhan to bowl to him at the nets. Team India's Analyst Hari Prasad Mohan narrated the entire incident on why Rohit decided to face the youngster at the nets and it will definitely melt your heart.

"We arrived at the WACA for a practice session, kids were wrapping up their morning event. As soon as we entered our dressing room, we were able to see 100 odd kids playing and enjoying cricket. There was one kid who caught everyone's eye and Rohit was the first one to identify the kid and after watching him, the two-three balls he bowled, everyone was amazed by his smooth run-up and how naturally talented he was," said Hari Mohan in a video posted on BCCI's official website.

"Rohit went out of the dressing room and asked the kid to bowl few more balls. Rohit Sharma invited him to bowl; it was a great sight to see. It was a memorable moment for the kid where he got to bowl to the Indian captain," he added.

When a 11-year-old impressed @ImRo45 with his smooth action!

A fascinating story of Drushil Chauhan who caught the eye of #TeamIndia Captain & got invited to the nets and the Indian dressing room. #T20WorldCup

Talking about the entire incident, the 11-year-old said: "Rohit Sharma saw me and he told me to bowl. I was very surprised, a day before that, my dad told me that I might be able to bowl to Rohit, so I was very excited. My favourite ball is in swinging yorker"

While facing him in the nets, Rohit asked the youngster: "You stay in Perth, how are you going to play for India?"

To this, the kid replies: "I am going to go to India but I don't know whether I'll be good enough."

India will play their first match of the upcoming T20 World Cup on October 23 against Pakistan at the Melbourne Cricket Ground.

Rohit Sharma ICC T20 World Cup 2022 Cricket
Get the latest updates on IPL Auction 2023 and check out  IPL 2023 and Live Cricket Score. Like us on Facebook or follow us on Twitter for more sports updates. You can also download the NDTV Cricket app for Android or iOS.