Sri Lanka vs India: Krunal Pandya "Excited To Get Back In Action" Ahead Of Sri Lanka ODIs. See Pics 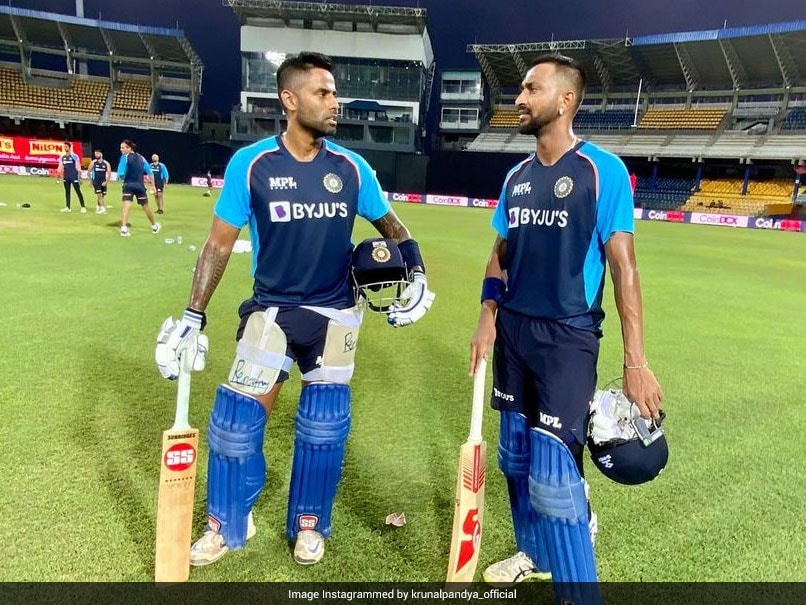 Krunal Pandya with Suryakumar Yadav ahead of 1st ODI against Sri Lanka.© Instagram

India all-rounder Krunal Pandya on Saturday shared several pictures from his practice session on Instagram ahead of the white-ball series againstSri Lanka. "Excited to get back in action in Blue," Krunal wrote in the caption box of the post. In the first photograph, Krunal is posing with two bats in his hands. The next slide features Krunal and his national and Mumbai Indians(MI) teammate Suryakumar Yadav. Seems like they are having an intense discussion. In the last picture, Krunal can be seen checking his bat. The post was soon filled with comments from fans of Krunal as they wished 'good luck' to the 30-year-old for the upcoming challenge.

Krunal's wife Pankhuri Sharma also made an appearance in the comment section and dropped two smiling face with heart eye and fire emojis. It was followed by Natasa Stankovic's comment who shared a red heart and biceps emojis.

"Maiden international hundred for Krunal coming up," wrote a user on the post.

Another wished him luck and wrote, "Good Luck Krunal. Make us proud."

Krunal has been quite active on the photo and video sharing platform recently. He has been regularly sharing glimpses from his training sessions in Sri Lanka.

Earlier, the 30-year-old had posted a video from his "conditioning session" with his followers.

"The joy of running is second to none. A glimpse from my conditioning session today 2 x(120x8) at 21 seconds pace. A beauty of a session," the caption read.

On Friday, the Board of Control for Cricket in India (BCCI) also shared a short clip from the team's practice session under the lights in Colombo on Twitter.

The Shikhar Dhawan-led Team India are set to play a six-match series (three ODIs and three T20Is) against Sri Lanka, starting from Sunday, July 18. Due to the COVID-19 scare, the entire series will be held at a single venue - R. Premadasa Stadium in Colombo.

India Cricket Team Sri Lanka vs India, 2021 Krunal Pandya Cricket
Get the latest updates on IPL 2021, check out the IPL 2021 Schedule and Indian Premier League Live Score . Like us on Facebook or follow us on Twitter for more sports updates. You can also download the NDTV Cricket app for Android or iOS.