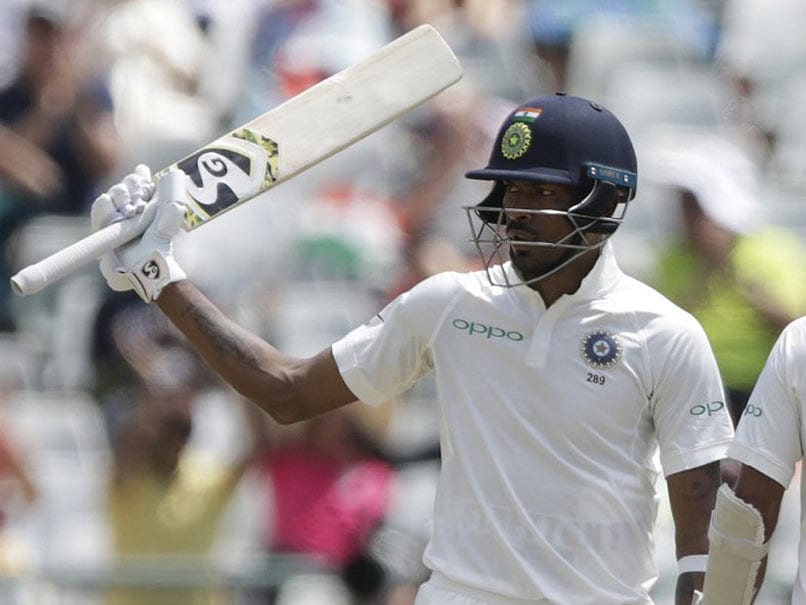 After bowling out South Africa for 286, India lost their top order for not too many on the first day of the first Test match between India and South Africa. The visitors lost half their side before even crossing the 100-run mark and were in danger of being bowled out for less than 150 but Hardik Pandya had other ideas. The Baroda all-rounder fought fire with fire and his brilliant counter-attacking knock helped India, not to concede a huge first innings lead at Newlands, Cape Town. Pandya 95-ball 93 came at a stage when India were losing wickets in a heap and along with Bhuvneshwar Kumar, the duo added 99 runs for the eighth wicket that eventually helped the visitors cross 200 on a pitch that had a lot of seam movement.

Twitter couldn't help but applaud the effort of Pandya as he almost single-handedly kept India in the match which has been dominated by the Proteas for most part of the Test match.

Hardik Pandya didnt just attack. This was a sensible, cleverly played innings. Has risen many notches as a player.

The day belonged to Pandya. He's singlehandedly kept India in the game...or rather hasn't allowed India to be written off completely. #SAvIND

A day @hardikpandya7 is unlikely to forget. Nor those who watched him perform with bat and ball

The thing about Hardik Pandya's innings was that he played the unorthodox shots out of choice & not out of insecurity. Absolutely brilliant innings!#SAvIND#HardikPandya

One's stature as a player increases when one scores overseas and against an attack comprising Steyn, Rabada, Morkel & Philander when everyone else has struggled, Hardik Pandya shows how it is done. Privilege to watch that 93.

Hardik Pandya's 93 reminds one of Kapil Dev's fabulous 129 against a rampaging Allan Donald at Port Elizabeth in 1992!#SAvIND

Well done @hardikpandya7 great intent,approach,fighting spirit.. This inn will give you lots of confidence..Good to see you r chipping in with ball as well by taking those 2 wickets.. keep going..guys let's do it tom @BCCI #INDvSA

Hardik Pandya now has more runs in one inning than total runs scored by Rohit Sharma in his entire career in SA (59).#SAvIND

somehow hardik pandya always scores valuable runs when India is in trouble, great counter attacking cricket, and not to forget bhuvneshwar kumar, his contribution is equally important \, if not more.......keep going boys just get us to 250

India were bowled out for 209 in the first innings that gave South Africa a healthy lead of 77 runs. Cheteshwar Pujara tried to hold the innings together but was dismissed by Vernon Philander on 26. Most of the Indian batsmen struggled to come to terms with the seam movement of the Newlands track and were caught behind the stumps as the South Africans managed to choke the flow of runs by picking up wickets at regular intervals. Apart from Pandya's lone show, Bhuvneshwar showed a lot of courage as he held one end up for Pandya to play his natural game. South Africa ended the second day on 65 for 2, lead by 142 runs as India play the catching up in the first Test match.

Comments
Topics mentioned in this article
India Cricket Team South Africa Cricket Team Hardik Pandya India vs South Africa South Africa vs India 2018 Cricket
Get the latest updates on IPL Auction 2023 and check out  IPL 2023 and Live Cricket Score. Like us on Facebook or follow us on Twitter for more sports updates. You can also download the NDTV Cricket app for Android or iOS.