With another year of several important sporting events coming up, here is a look at the five athletes who can influence Indian sports like never before. 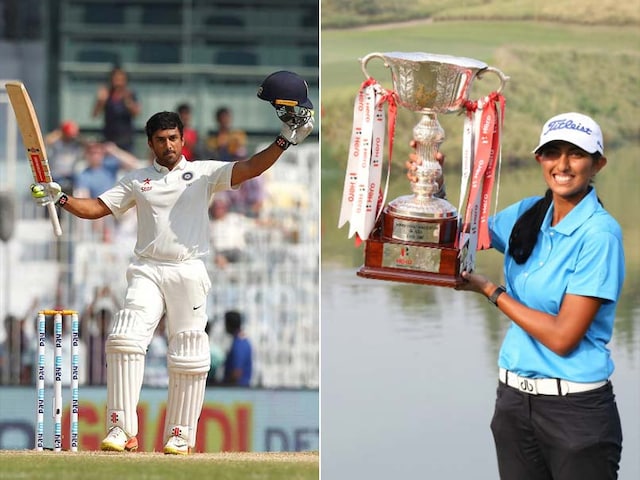 Cricketer Karun Nair (L) and golfer Aditi Ashok were among the rising stars for India in 2016.© BCCI/AFP

Indian sports was all about the emergence of the young brigade in 2016. PV Sindhu, Sakshi Malik, Dipa Karmakar were shining stars as they rose to bring glory to the nation.

While badminton player Sindhu and wrestler Sakshi won medals at the 2016 Rio Olympics, Dipa missed a bronze medal by a whisker. But while these girls stole the limelight, there were also several other new names that made headlines and have shown the prospect of a better future.

With another year of several important sporting events coming up, a look at the five athletes who can influence Indian sports like never before.

Nair achieved a feat in his debut Test series that many cricketers fail to get their entire careers. His 303 not out in the Chennai Test against England has raised the expectations from him. India will be playing Test series against Australia and Bangladesh at the beginning of 2017 and Nair will surely be the one to look out for.

At 26, Yadav is sort of a late bloomer in cricket. But then, he has made up for it by a stellar performance in the series against England - his debut series.

The Haryana Ranji Trophy player not only scored a ton and a half-century but also took 10 wickets with his off-spin. Now, courtesy Yadav, India can expect to end its long wait for a reliable all-rounder.

The 18-year-old golfer first came into prominence as she finished 41st in the women's category at Rio Olympics. For the first two days of the event, she was in the top-eight of the field.

After the Olympics, She maintained her form and has earned a partial LPGA Tour membership for 2017 after finishing tied 14th at the qualifying tournament in Florida.

Not many would have heard of him, but Boris is one of the most reliable players in India's Under-17 football team that will play at the FIFA U-17 World Cup. He can play as wing-back and on the attacking flanks as well.

He will need all the support from his teammates to do well in the mega-event which is touted to change the contours of the game in the country.

Vinesh is the third girl from the Phogat family in Haryana to make her name in women's wrestling. She won a gold medal at the 2014 Commonwealth Games and entered the quarter-finals in the 48kg category at Rio Olympics. She suffered a knee injury in the match and had to concede defeat.

However, at 22, Vinesh is expected to bring more laurels to the country like her sisters, Geeta and Babita.

Comments
Topics mentioned in this article
Other Sports Karun Nair Jayant Yadav Aditi Ashok
Get the latest Cricket news, check out the India cricket schedule, Cricket live score . Like us on Facebook or follow us on Twitter for more sports updates. You can also download the NDTV Cricket app for Android or iOS.