The tie between Lionel Messi and Lewis Hamilton is the first in the 20-year history of the Laureus awards. 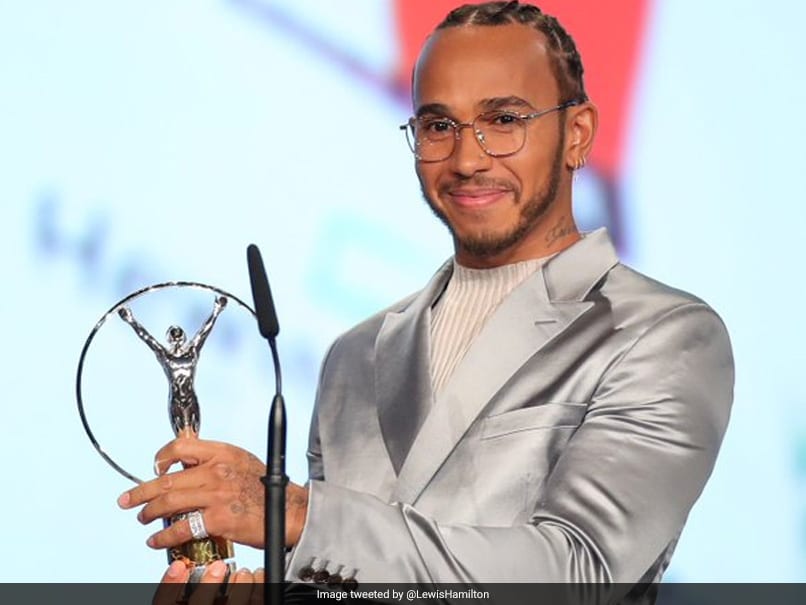 Lewis Hamilton with the Laureus Sportsperson of the Year award.© Twitter

Formula One champion Lewis Hamilton and football superstar Lionel Messi shared the Laureus sportsman of the year award at Monday's ceremony in Berlin. Hamilton, 35, a six-time world champion and Barcelona star Messi, 32, share the award for their achievements in 2019. This is the first time a footballer has won the award and also the first occasion in the event's 20-year history when the jury reached a tied decision.

"I am honoured to be the first to win this award being a sportsperson coming from a team sport," Messi said from Barcelona via a video message.

US gymnastics superstar Simone Biles, who won five titles at the 2019 world championships in Stuttgart to leave her with a record 25 world gold medals, took the Laureus sportswoman of the year award for the third time.

"It means the world to me, this is my third Laureus award and I'm really grateful," said Biles in a video message.

South Africa, who won the 2019 World Cup, were named team of the year, beating Jurgen Klopp's Liverpool and the US women's football team.

"With this group of players, we came together for the love of the game with one goal and fought so hard for each other," Kolisi told the audience in Berlin.

"We gave everything we had to win the trophy and hopefully inspire kids for generations to come."

Oksana Masters, who was born with limb impairments caused by radiation from Chernobyl and was later adopted in the US, won the sportsperson with a disability award.

She also won silver medals in the road race and time trial H5 at the para cycling road world championships.

Colombia's Egan Bernal, 22, who became the youngest rider to win the Tour de France for 110 years, won the breakthrough award after winning the world's top cycling race in what was only his second three-week classic event.

"I'm really happy, this is a big result for me in my career," the Colombian said in a video.

German F3 driver Sophia Floersch scooped the comeback of the year award for racing once again at the Macau Grand Prix last November, a year after a crash on the same circuit left her with a spinal fracture.

Legendary batsman Sachin Tendulkar won the public vote for the top sporting moment over the last 20 years for leading his country to victory at the 2011 World Cup at the sixth attempt.

Lionel Messi Other Sports
Get the latest updates on ICC Women's Cricket World Cup 2022 and IPL 2022, check out the Schedule , Live Score and IPL Points Table. Like us on Facebook or follow us on Twitter for more sports updates. You can also download the NDTV Cricket app for Android or iOS.