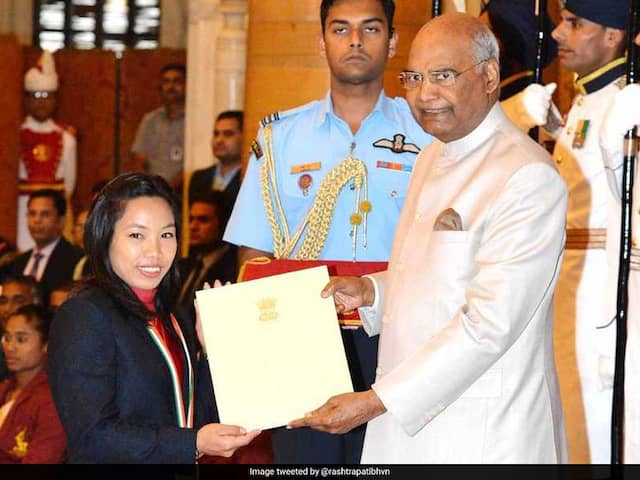 Ahead of the prestigious National Sports Awards Ceremony at the Rashtrapati Bhawan on Tuesday, the awardees candidly answered an array of questions and shared their special training regimen ahead of the 2020 Tokyo Olympics. Organised by Indian Sports Fan, one of India's largest sports fan online communities at a Delhi hotel, the National Awardees came together to reply to their fans in on a variety of subjects. Leading from the front, Khel Ratna Awardee and Asian Games gold medallist Mirabai Chanu emerged as a self-professed Salman Khan movie buff and is a big fan of the current reality show judge Neha Kakkar songs and live shows. Mirabai Chanu also shared her strict regimen and her homesickness for traditional fish chutney, which she even carries in training camps.

Ace shooter and CWG gold medalist Shreyasi Singh boasted about mutton do Pyaza and is a big fan of Kangana Ranaut's movie "Queen". Her favourite go-to entertainment package with a touch of Hollywood is "Believer".

Asian Games Gold medallist Rahi Sarnobat from Kolhapur is crazy about Kareena Kapoor and Shahid Kapoor starrer 'Jab We Me' with rest of her time occupied in reading and shooting.

Another Arjuna awardee, shooter Ankur Mittal's best food away from the camp is 'chole bhature.

Full of life, CWG medalist Sikki Reddy is all up for Bollywood film "Zindagi Na Milegi Dobara", with her favourite Bollywood song "Tera Yaar Hoon Main" revealing the romantic side of the fun-loving girl.

Manpreet Singh and Savita Punia of the men's and women's hockey teams, shared their side of story in a face-to-face chat, professing a common liking for Bollywood film "Chak De India", revolving around the women's hockey team, with Manpreet's additional choice being the recently released "Gold", which is also based on hockey.

The Fans questions were put together via twitter platform of @IndianSportFan since the beginning of Asian Games 2018.

The programme, titled 'FanSawal' has been created to bring players and their fans closer in a coherent and structured form with a sincere and earnest effort to encourage sports stars to interact with their fans.