Tokyo Olympics: Weightlifter Hidilyn Diaz of Philippines was hailed after securing country's first Olympic gold medal as she smashed her personal best with final clean and jerk of 127kg in the women's 55kg category. 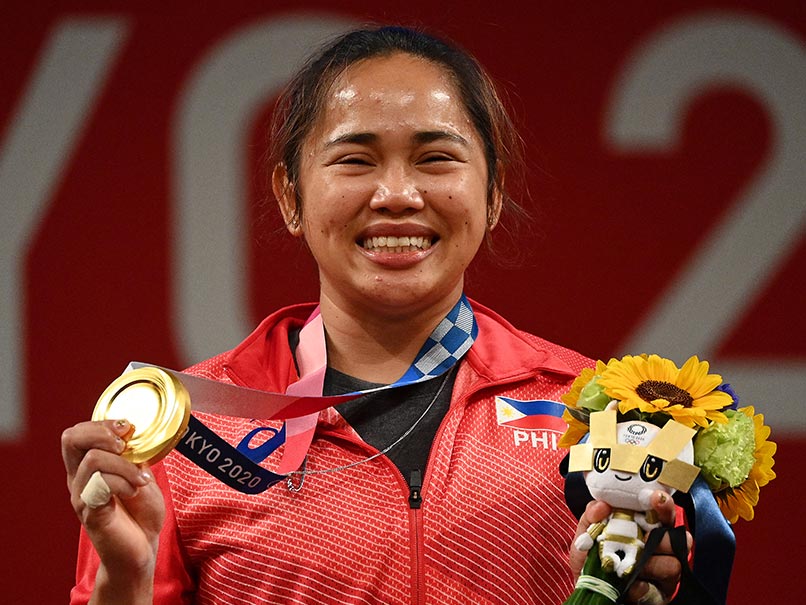 With their eyes glued to a television in the southern Philippines, the family of weightlifter Hidilyn Diaz yelled "push, push, push!" as she hoisted the bar to win the country's first Olympic gold medal. "Then we erupted in joy -- we were shouting, some shed tears of joy," Emelita Diaz told AFP Tuesday, a day after watching her daughter's historic performance in Tokyo -- far from her hometown of Zamboanga. "We didn't know what to feel because we were extremely happy," she added. After nearly 18 months training in exile in Malaysia because of Covid-19 restrictions, Diaz smashed her personal best and won gold with a final clean and jerk of 127kg in the women's 55kg class.

The 30-year-old's triumph -- which followed her silver medal in Rio five years ago -- has made her a national hero, alongside the likes of boxing legend Manny Pacquiao.

"Thank you, Hidilyn Diaz, for the first-ever Olympic Gold for the Philippines! We are so proud of you!," Pacquiao tweeted from the United States where he is training for his upcoming fight against American Errol Spence.

The feat is also a life-changing windfall for Diaz, the daughter of a tricycle driver on the southern island of Mindanao.

As a reward for winning gold, Diaz will receive at least 33 million pesos ($655,000) from the government and private sector, as well as a house.

"It's as if our athletes are only getting minimum wage," he said.

Diaz's stunning victory was splashed across the front pages of Philippine newspapers and dominated internet platforms.

Diaz's win was an inspiration for other women, said Karen Afurong, an instructional designer in Manila.

Emelita said the family spoke with Diaz Tuesday morning and congratulated her.

"I told her... 'It's a big honour to our family that you brought another honour to the country'," Emelita told AFP via telephone.

More than 20 relatives, including nieces and nephews, crowded onto the porch of the family home to watch Diaz's performance, using a smartphone connected to their television.

"We were nervous," said Emelita.

Diaz has not seen her family since December 2019 and has spoken openly of the sacrifices she has made in pursuit of her dream.

But after a sleepless night, Diaz said Tuesday she was already thinking about the Paris Olympics in 2024.

"Qualifying will be difficult, but if my strength is there I will continue," she told reporters on Zoom.

"I cannot quit after winning. I need to continue until someone succeeds me," she said.

Comments
Topics mentioned in this article
Olympics 2020 Olympics Weightlifting
Get the latest updates on ICC Women's Cricket World Cup 2022 and IPL 2022, check out the Schedule , Live Score and IPL Points Table. Like us on Facebook or follow us on Twitter for more sports updates. You can also download the NDTV Cricket app for Android or iOS.