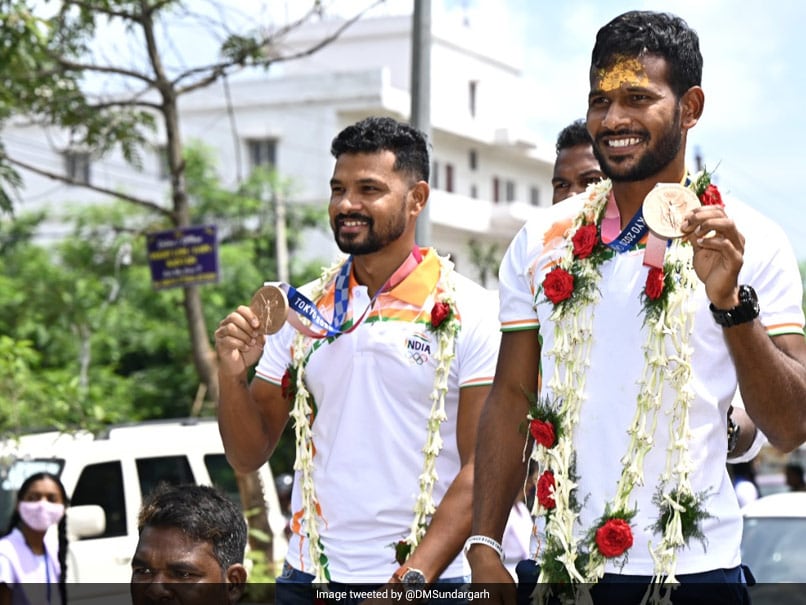 Four hockey players from the state, who were part of Indian teams in the recently concluded Tokyo Olympics, received a rousing welcome in their native district Sundergarh on Saturday, with hundreds of people descending on the streets to cheer for them as they made their way to their homes from the Jharsuguda airport. Olympians Deep Grace Ekka, Namita Toppo, Amit Rohidas and Birendra Lakra were greeted upon their arrival at Veer Surendra Sai (VSS) Airport with garlands and bouquets by locals, as their family members stood by, Sundergarh Collector Nikhil Pavan Kalyan said.

A procession was taken out from Parijat Park in Sundergarh town, with the players waving at their fans and supporters, who lined up on the streets to get a glimpse of the Olympians.

The Indian women's hockey team, of which Ekka and Toppo were members, finished fourth in the Tokyo Olympics.

The men's team bagged the bronze medal, breaking a dry spell of 41 years.

A programme was organised during the day by the Sundergarh district administration to felicitate the four players.

"We are overwhelmed with the love people bestowed on us today. We are grateful to all sports enthusiasts and the local administration for their support. We are especially thankful to our Chief Minister Naveen Patnaik for backing hockey in India," said Amit Rohidas, the defender of the men's team at the Olympics.

The collector, after congratulating the players, observed that Sundergarh has been the breeding ground for hockey champions.

"Over the years, many hockey players have emerged from this district. With the government lending its wholehearted support to the game, many more from Sundergarh would be making Odisha proud in the years to come," Kalyan added.

Tirkey, on the occasion, said the Naveen Patnaik government is setting up astro turf ground in 17 blocks of the district for hockey players.

Comments
Topics mentioned in this article
India Women India Hockey India Olympics Olympics 2020
Get the latest updates on IND vs NZ 2021, check out the Schedule and Live Score . Like us on Facebook or follow us on Twitter for more sports updates. You can also download the NDTV Cricket app for Android or iOS.