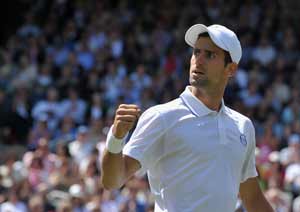 Djokovic is bidding to win his first Olympic gold medal after taking home a bronze from the 2008 Games in Beijing and he remains firmly in the hunt after seeing off the big-serving Tsonga on Wimbledon's Centre Court.

Following a hard-fought win over Lleyton Hewitt in the previous round, this was Djokovic at his dominant best and the world number two's first grasscourt clash with the in-form Murray promises to be a titanic battle.

The Serb has every reason to believe he can win after surviving an epic five-setter against Murray in the Australian Open semi-finals earlier this year to secure his eighth win in 13 meetings with the world number four.

Djokovic made a superb start against Tsonga, breaking in the second game and again in the sixth before serving out the set.

Tsonga, a Wimbledon semi-finalist for the last two years, had won the longest three-set men's singles in Olympic history in the second round and he fought back with an early break in the second set.

But Djokovic recovered from that setback to break midway through the set and then delivered the knock-out blow with one more break at 5-5.

Moments later he punched the air in delight when Tsonga's return on match-point fell short of the net.

Comments
Topics mentioned in this article
Tennis Novak Djokovic Andy Murray Olympics 2012
Get the latest updates on ICC T20 Worldcup 2022 and CWG 2022 check out the Schedule, Live Score and Medals Tally. Like us on Facebook or follow us on Twitter for more sports updates. You can also download the NDTV Cricket app for Android or iOS.