Japanese equestrian Hiroshi Hoketsu, who looks set to be the oldest competitor at the London Olympics, says at 70 he feels as fit as ever and fancies his chances of success at this year's Games. 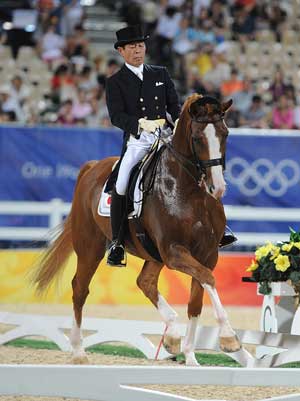 Japanese equestrian Hiroshi Hoketsu, who looks set to be the oldest competitor at the London Olympics, says at 70 he feels as fit as ever and fancies his chances of success at this year's Games.

Hoketsu, who was the oldest Olympian in Beijing in 2008, says his fitness regime is not so arduous, with about 40 minutes of muscle training every day accompanied by vitamins and immune-boosting supplements.

His diet is perhaps less strict than others who will be vying for glory in the summer, with the septuagenarian eating and drinking what he likes - including a nightly glass of wine.

And it appears to have done him no harm. His weight has remained at 62kg (137lbs) since he trotted to his first Olympics in his native Tokyo in 1964, finishing 40th in show jumping.

"I haven't changed much in four years, physically and mentally. Luckily I have had no major illness, except for bouts of cold," Hoketsu, who turns 71 on March 28, told AFP in a telephone interview from his home in Aachen, Germany.

They topped the individual dressage rankings for Asia and Oceania to earn a spot in London. The Japan Equestrian Federation formally selected them for the Games on Monday.

"You keep on doing what you do. That's the key," said Hoketsu, who was born in 1941, the year Japan went to war with the United States.

"And you must regularly do a small amount of muscle training. But at my age, I try not to get too serious about it."

In London, when he will be 71 years and four months old, he will be just a whisker away from claiming the title of the oldest ever Olympian, but says he has no thoughts of retirement.

The oldest Olympic competitor ever was Swedish shooter Oscar Swahn, who took part in the 1920 Antwerp Games at the age of 72 years and 10 months and won a silver medal.

Hoketsu said the London Games will be indeed a "milestone" in a horse-riding career that began almost six decades earlier when he first saddled up during a summer camp.

"I can't tell what lies ahead. But I will probably not quit right away. Never." said the 168-centimetre (five foot six inch) rider, who has lived in Aachen since his retirement in 2003 as president of a US-affiliated drugs firm.

When Hoketsu competed astride Whisper at the Beijing Olympics, he was the oldest athlete in any event and the oldest to appear for Japan in any Olympics - 67 years and four months.

Before Hoketsu, the oldest Japanese Olympian was Kikuko Inoue, a grandmother of five, who also competed in dressage at the 1988 Seoul Games at the age of 63 years and nine months.

The self-proclaimed "hope of old men" in a country famed for longevity, Hoketsu finished ninth in team dressage and 35th in individual dressage at the Beijing Games, his first Olympic event in 44 years.

After his Olympic debut in Tokyo, he switched from show jumping to dressage, one of the more stately Olympic sports, which is often called horse ballet and requires relatively little physical strength.

In dressage, points are awarded for the performance of the horse and rider in a series of movements. Judges rate how the horse manoeuvres in response to body signals from the rider.

Hoketsu was picked as a substitute for 1984 Los Angeles Games, and he narrowly missed out on the 1988 Seoul Olympics when his horse encountered quarantine problems.

At the 2010 world championships in Lexington, Kentucky, the Japanese finished 31st in the second stage and failed to reach the final "Grand Prix Freestyle" contest among the top 15.

Whisper was agitated by moving pictures on the giant screen at the arena.

"She is so sensitive. She is kind of fierce and nervous," Hoketsu said of his mount, which he has ridden for more than five years.

"I don't want to sound pompous because there are many strong competitors in Europe. But I hope to finish higher (in London) than at the last world championships."

The road for the pair has been rocky since Whisper injured its front legs after the worlds in September 2010.

"Whisper has miraculously recovered quickly," Hoketsu said. "But when my horse was unwell last year, it rubbed off on me and caused my neck and back to hurt."

The horse has since competed in six events, culminating in the victory in Vidauban.

"I really thank my horse and I feel much happier than last time."