Yuzvendra Chahal and Kuldeep Yadav shared a fun chat on Chahal TV after India's win in the first ODI in Napier. 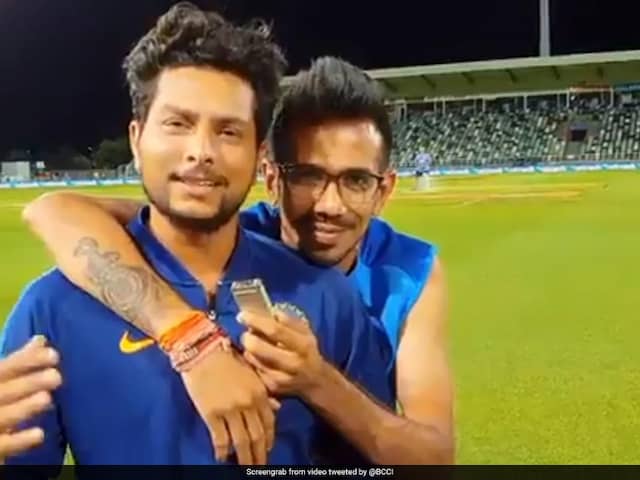 Kuldeep Yadav and Yuzvendra Chahal took 6 wickets together in the Napier ODI.© screengrab/Twitter

After Virat Kohli's appearance on Chahal TV, it was time for Kuldeep Yadav to grace the chat show for some banter with Yuzvendra Chahal. Kuldeep Yadav, who picked up four wickets for 39 runs in his 10-over quota, spoke about his experience of bowling on flat wickets and small grounds, and also promoted the online show that hosts star performers for India. Yadav was instrumental in India drawing first blood against New Zealand in the five-match ODI series. India lead the series 1-0. Watch the video here to see how the Indian spin pair entertained one and all.

On our latest episode of Chahal TV, we bring you "KULCHA" served hot straight from Kiwi Land - by @RajalArora #TeamIndia #NZvIND

Earlier on Wednesday, India crushed New Zealand in the first ODI but a bizarre and unprecedented sun-induced interruption overshadowed the on-field action. Entering the five-match rubber following maiden Test and ODI series triumphs in Australia, India signalled their intent with a clinical display, which saw them chase down a revised target of 156 by eight wickets in 34.5 overs. The Duckworth-Lewis method came into the picture for an interruption which was not caused by rain for the first time.

On a near-perfect day, the only thing that didn't go their way was the toss. But India made light of that by bowling out the home team for a paltry 157 in 38 overs.

Wrist spinner Kuldeep Yadav was the most successful bowler, returning figures of 4/39 in 10 overs, while seamer Mohammed Shami finished with an excellent 3/19 in six overs. There were also two wickets for leg-spinner Yuzvendra Chahal.

Captain Kane Williamson top-scored for the hosts with 64 off 81 balls.

In response, Shikhar Dhawan began the innings with a flurry of boundaries, eventually finishing as the top-scorer with 75 off 103 balls.

New Zealand Cricket Team New Zealand vs India Cricket
Get the latest Cricket news, check out the India cricket schedule, Cricket live score . Like us on Facebook or follow us on Twitter for more sports updates. You can also download the NDTV Cricket app for Android or iOS.