Shikhar Dhawan frequently posts on social media about his family. 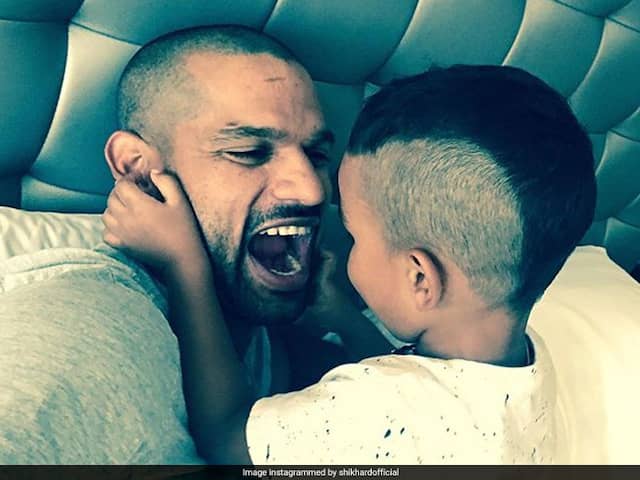 Shikhar Dhawan, after scoring consecutive half-centuries in first two One-day Internationals in New Zealand, has his focus on his family and amusingly on his "receding hairline". On Tuesday, the 33-year-old Indian opener shared a video on Twitter, in which his son Zoraver on his shoulders can be seen trying an experiment on his father's head. "A new formula to grow hair discovered by Zoraver, the great. Watch how this miraculous ingredient helps you with your receding hairline," Shikhar Dhawan captioned the video.

Dhawan scored an unbeaten 75-run knock in the opening match of the five-match ODI series in Napier. He shared a 91-run stand with skipper Virat Kohli for the second-wicket to help India beat New Zealand by eight wickets.

The left-handed batsman followed it up with a 67-ball 66 in the second ODI at Bay Oval. The opening pair of Dhawan and Rohit Sharma established a 154-run stand as India registered an emphatic 90-run win in Mount Maunganui.

India won the third ODI by seven wickets at Bay Oval on Monday to clinch the ODI series with two matches to spare.

Dhawan managed to score just 28 runs off 27 balls but the captain-deputy pair of Kohli and Rohit stitched a match-winning stand of 113 runs for the second-wicket.

After bowling out New Zealand for 243 in 49 overs, India chased down the target in 43 overs with Ambati Rayudu (40*) and Dinesh Karthik (38*) unbeaten on the crease.

The fourth ODI between India and New Zealand will be played at Seddon Park, Hamilton, on Thursday.

Kohli has been rested for the remaining two ODIs and three-match T20 International series in New Zealand. Rohit will captain the Indian team in Kohli's absence.

Shikhar Dhawan Cricket New Zealand vs India
Get the latest Cricket news, check out the India cricket schedule, Cricket live score . Like us on Facebook or follow us on Twitter for more sports updates. You can also download the NDTV Cricket app for Android or iOS.