India registered a comprehensive 90-run win at Bay Oval to take a 2-0 lead in the five-match series. 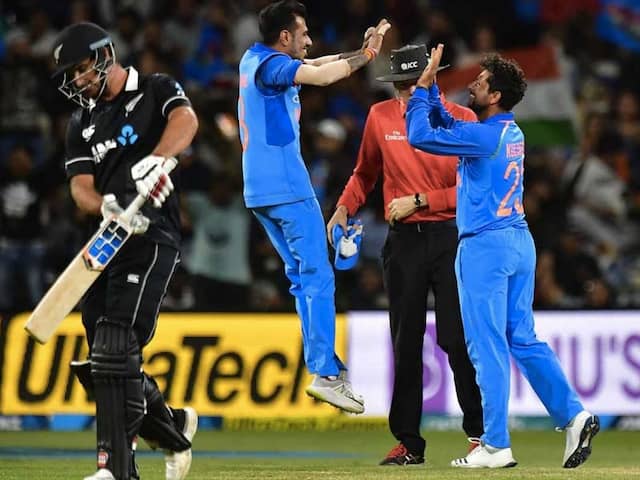 Kuldeep Yadav claimed four wickets while Rohit Sharma scored 87 off 96 balls as India thrashed New Zealand by 90 runs in the second One Day International at Bay Oval to take a 2-0 lead in the five-match series on Saturday. The left-arm spinner had claimed four wickets in India's first ODI win as well. Some fine bowling by the New Zealanders in the final 10 overs helped them keep India to a score of 324 for four in 50 overs but proved too much for the hosts as they were bowled out for 234 in 40.2 overs to give India another comfortable victory.

Opting to bat, India piled up a challenging total thanks to fluent half-centuries from Rohit and Dhawan (66). There were significant contributions from captain Virat Kohli (43), Ambati Rayudu (47) and MS Dhoni (48 not out).

Kedar Jadhav contributed a quickfire 22 not out off just 10 balls as he and Dhoni added 53 runs in final 4.2 overs for the unconquered fifth wicket.

The home side batsmen offered very little resistance save Doug Bracewell, who top-scored with 57.

Kuldeep claimed consecutive wickets of Henry Nicholls and Ish Sodhi in the 31st over, as he polished off the New Zealand innings in a burst of three overs.

Chasing a stiff target of 325, New Zealand lost their top four batsmen, including skipper Kane Williamson (20) and senior pro Ross Taylor (22), by the 18th over when they touched 100-run mark.

The Kiwis were denied a strong start with Bhuvaneshwar Kumar (2/42) and Mohammed Shami (1/43) bowling with a lot of discipline. Opener Martin Guptill (15) was the first to go off Kumar after two lucky escapes but New Zealand were dealt a heavy blow when captain Williamson was out in the eighth over after a promising start.

The Kiwi captain hit Shami for two consecutive sixes and a boundary in the eighth over before chopping the fourth delivery onto his stumps. Taylor, who has an impressive record against India, and opener Colin Munro dealt in singles for a few overs but India got another breakthrough.

Munro went for a switch-hit off a Chahal (2/52) delivery only to miss it completely and was adjudged leg before. New Zealand were in deep trouble when Taylor was dismissed via an excellent effort by veteran wicketkeeper Dhoni, who whipped off the bails after Chahal beat the batsmen with his drift. Taylor thought he was in but replays showed his feet was not grounded when Dhoni completed formalities in a flash.

A run glut followed before Kuldeep wrapped up the New Zealand innings with a four-wicket burst.

First, he had Tom Latham (34) trapped leg before in the 25th over and then had Colin de Grandhomme (3) two overs later to reduce New Zealand to 146 for 6.

Kuldeep returned in the 31st over to dismiss Nicholls (28) and Sodhi (0) off consecutive deliveries to end the New Zealand innings.

Yuzvendra Chahal New Zealand vs India Cricket New Zealand vs India, 2nd ODI
Get the latest updates on IPL 2020, check out the IPL Schedule for 2020 and Indian Premier League (IPL) Cricket live score . Like us on Facebook or follow us on Twitter for more sports updates. You can also download the NDTV Cricket app for Android or iOS.