India were bowled out for 92 in the 4th ODI against New Zealand and Michael Vaughan took to Twitter to have his say on the matter. 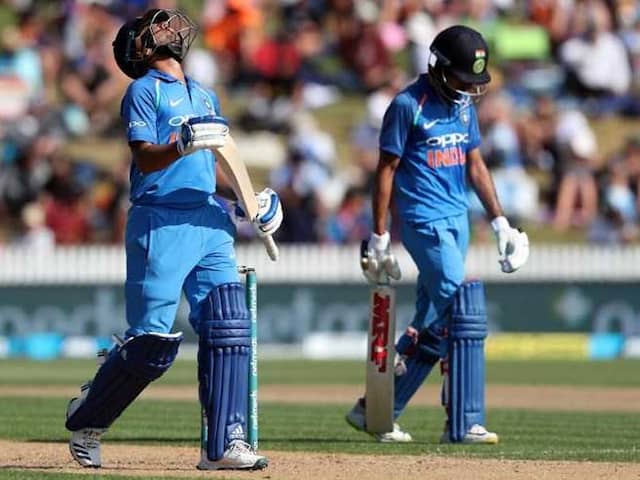 India were bundled out for 92 in the fourth ODI against New Zealand on Thursday.© AFP

India on Thursday faced the ignominy of being bowled out for 92 in the fourth ODI of the five-match series against New Zealand at Seddon Park in Hamilton. In one of the poorest batting performances in recent times by India, just four players managed to get into double figures. Yuzvendra Chahal was the top-scorer for India, who were without superstar Virat Kohli, scoring an unbeaten 18 off 37 balls. Trent Boult was the chief destroyer, returning with figures of five 21, while Colin de Grandhomme picked three wickets. Following India's batting collapse, former England captain Michael Vaughan took to Twitter to rub salt into Indian wounds.

The former England opener said he couldn't believe any team in this day and age could be bowled out for less than 100 runs.

Vaughan's comment didn't go down too well with Indian fans, who took the opportunity to remind him that England were bundled out for 77 in their first innings of the 1st Test against the Windies last week.

Can't believe any can bowlout on 77 this days..

Recently a team has played more cricket than anyone else in this planet got all out for 77... Can't believe

We know it is a bad score but it is better than 77 all out in test.... Have you ever tweeted that

Winning the toss, New Zealand captain Kane Williamson had no hesitation in putting India into bat. Stand-in skipper Rohit Sharma struggled big time against the moving ball and in his 23-ball 7-run knock, he failed to hit even a single boundary.

Shikhar Dhawan (13) was the first to be dismissed and soon India found themselves on 35 for six with Kohli's replacement, Shubman Gill managing just 9. Ambati Rayudu and Dinesh Karthik returned to the pavilion without disturbing the scorers while Kedar Jadhav and Bhuvneshwar Kumar were dismissed for one each.

Hardik Pandya hit four boundaries in his 16-run knock but he too fell victim to Boult. Chahal and Kuldeep Yadav (15) provided some late resistance to take India closer to the 100-run mark.

Martin Guptill gave the hosts a flying start, hitting two fours and a six in his 4-ball 14 blitz but Bhuvneshwar Kumar sent him packing to give India an early breakthrough.

And despite dismissing captain Williamson (11) early as well, India just didn't have enough runs on the board to cause panic in the New Zealand dressing room.