Pro Kabaddi: Dabang Delhi and Bengal Warriors both were considered as underdogs at the start of the season. 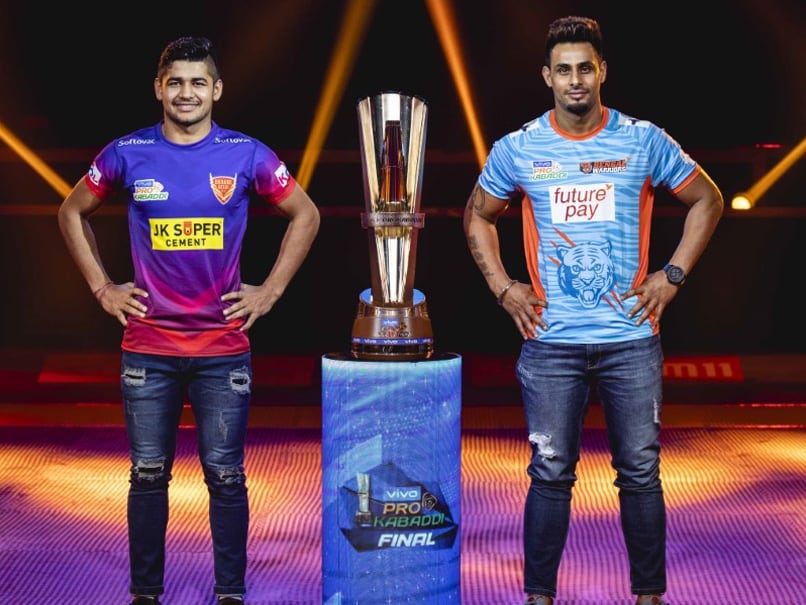 Dabang Delhi and Bengal Warriors are all set to play their first-ever PKL final.© PKL

"Most toughest season", the organisers had termed the Season 7 of the Pro Kabaddi League (PKL) and as the tournament progressed, eventually it really turned out to be a nail-biting edition where all experienced teams with some great players in their ranks are back home and two new teams -- Dabang Delhi and Bengal Warriors, who have never played a final, are all set to be up against each other on Saturday. Undoubtedly, when two teams -- considered as underdogs of the league before the start of the season -- meet in the summit clash after outclassing the giants of the sport, another edge of the seat match is bound to be expected.

However, the Bengal camp would be worried as their skipper and star player Maninder Singh was on bench in the semi-finals and the BC Ramesh-coached side will pray for their leader's early recovery before Saturday's contest. Meanwhile, Delhi would hope that he misses to be on the mat as it could be an easy outing for them.

When it come to the raiding department, young Naveen Kumar will once again lead the charge for Delhi. With 21 consecutive Super 10s and, a league record, Naveen has had a campaign to remember. The youngster has broken numerous records in his 22 appearances so far this season and has led Delhi to their maiden semi-final appearance in the league.

While Naveen has undoubtedly been Delhi's lead raider, his teammates Chandran Ranjit and all-rounder Vijay have also been quite impactful in attack, scoring 116 and 45 raid points respectively. Their attack also boasts of the experienced Meraj Sheykh, who has come in handy over the course of the season.

For Bengal, Maninder has led the attack from the front and registered his second straight 200-raid point campaign in the process. He has already recorded his best performance in a match this season with his 19-raid point showing against Jaipur Pink Panthers. He also recorded the most Super 10s he has ever recorded in a single season (10) and equalled his record for the most Super Raids in a single season (6) while averaging more than 10 raid points per game.

A smart finisher, Maninder has proven vital in finishing close matches in his team's favour. He has found strong support in K. Prapanjan, Mohammad Nabibakhsh and Sukesh Hegde this season. Thus, Bengal have three raiders who have more than 75 raid points in the season, making them one of the most potent raiding units in the league.

When it comes to the defenders, veteran Ravinder Pahal has enjoyed another outstanding campaign for Delhi, finishing the league campaign as the team's leading tackle point scorer with 59 in 21 appearances. The right corner has been well-supported by his partner on the opposite flank, team captain Joginder Singh Narwal, who has 49 tackle points this season.

Cover defenders Vishal Mane and Amit Kumar have also been reliable, scoring 27 and 37 tackle points respectively. Delhi's decision to retain their experienced defensive trio of Pahal, Joginder and Mane coupled with the addition of Amit Kumar has worked out just as well as they would have hoped. The defence has looked formidable throughout the season and they would be aiming to continue that run for one final time.

On the other hand, Baldev Singh will once again lead the defence for Bengal. He has already crossed the three-digit mark in tackle points from just 23 games with an impressive strike rate of 55.17. His average of 2.59 tackle points is already much better than his 1.33 tackle point average in last season. Sitting second in the list of most High 5s in the season with 6, Baldev could prove to be a major threat for Delhi.

The team management will surely want Baldev to keep his good show going and to keep Naveen off the mat as much as they can.

Rinku Narwal sits just four tackle points shy of Baldev, making Bengal one of only two teams with two defenders in the top 10 best defenders of the season so far. Jeeva Kumar's big match experience, too, could prove important for Bengal as they chase their maiden PKL title.

Overall, when both the teams will leave no stone unturned to lift the trophy after a hard work of three long months, it is difficult to predict any team as favourite as both of them have their advantages and shortcomings.