Youngsters Ajeet and Manjeet were the stars for Thalaivas and Paltan respectively in a match that had been billed as a clash of the Kabaddi stalwarts. 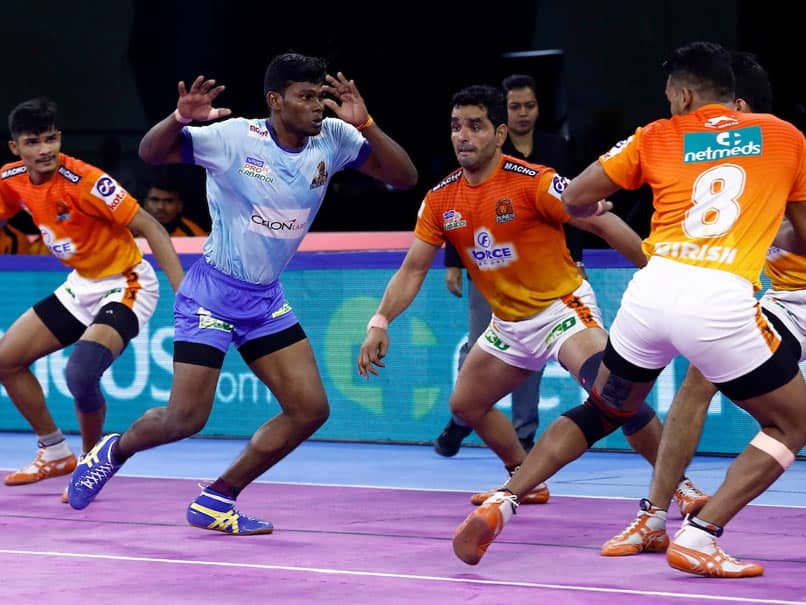 Home team Tamil Thalaivas and Puneri Paltan played out a highly entertaining 31-31 draw in a see-sawing second match of Pro Kabaddi League Season 7 at Jawaharlal Nehru Indoor Stadium on Sunday. In the other match, Telugu Titans thrashed Haryana Steelers 40-29 in an one-sided encounter. Youngsters Ajeet and Manjeet were the stars for Thalaivas and Paltan respectively in a match that had been billed as a clash of the Kabaddi stalwarts. Rahul Chaudhari, Ajay Thakur and Mohit Chhillar are all Kabaddi royalty for a reason, and it was hardly a surprise when Tamil Thaliavas made a dominant start to the match on their home mat.

The early strategy from the home team and coach E Bhaskaran was clearly to use Rahul Chaudhari in the raids and preserve Ajay Thakur for the later stages.

But the plan backfired as the Paltan defence held firm and troubled the Tamil raiders. Pankaj Mohite was once again the best raider on the mat for Pune as the team inflicted the first all-out on the Thalaivas with nine minutes remaining till half time.

The Chennai-based team started confidently after the reset though, with Rahul Chaudhari and local-boy Ajeet dominating the raids.

The first half ended 15-13 in favour of Puneri Paltan. Thalaivas' defence had a better game plan in the second half, and Ran Singh's consistent, successful tackles turned things around for the Chennai team, clinching their first all-out within two minutes after the restart.

Defender Girish Ernak had an uncharacteristically poor game in the night and was the target for the Tamil raiders while Manjeet's all-round efforts for Paltan kept the battle neck-to-neck.

Hadi Tajik's tackle with just under five minutes remaining took out Rahul Chaudhari but Ajeet restored parity with a brilliant follow-up raid, sending Girish Ernak to the dugout in the process.

Pankaj Mohite, playing his first Pro Kabaddi season, defied his experience, to push his side ahead with little over three minutes remaining and reducing the Thailavas on the mat to one.

But Ajeet, who was the last man standing, had other plans, securing four points in a Super Raid, with slightly over two minutes remaining in the encounter, to tilt the balance once again in Thalaivas' favour.

But both Rahul Chaudhari for Thalaivas and Manjeet for Paltan failed in their attempts at Do-or-Die raids in the final minute which saw the sides settling for a draw.