With this win, Bengaluru Bulls moved to the second spot in the points table with 27 points from 8 matches. 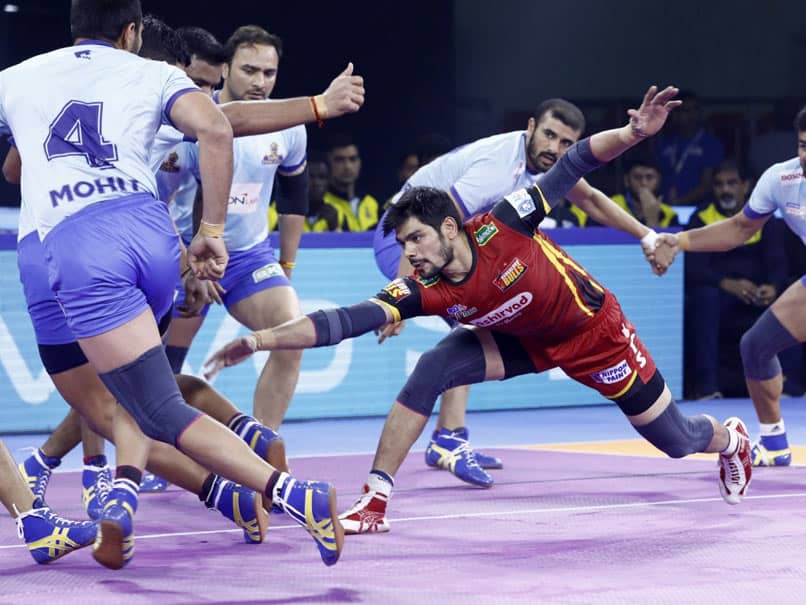 The Chennai leg of the Pro Kabaddi League season 7 began on a disappointing note for the home fans as Bengaluru Bulls humbled Tamil Thalaivas by a scoreline of 32-21 at the Jawaharlal Nehru Indoor Stadium here on Saturday. In the other match, Bengal Warriors and Dabang Delhi played out a draw 30-30. The contest was always going to be about Bengaluru's raiding prowess and Thalaivas' resolute defence and Pawan Sehrawat's storming early raids meant the former found themselves 5-0 up in the opening four minutes of the match.

Thalaivas' poor form in the Do-or-Die raids continued as they lost Ajay Thakur and Shabeer Bappu. Bengaluru Bulls tackled the Thalaivas' last man Manjeet Chillar to inflict the first All-Out of the game and silenced the home crowd as the scoreline read 10-0.

The Tamil Thalaivas tried to scratch their way back into the game as they tackled Pawan Sehrawat twice and Shabbir Bapu picked two points in a single raid. But, Bengaluru Bulls had their noses upfront as they went into the halftime break 17-10.

Ajith Kumar managed to get out of the grasp of Sehrawat and a brilliant foothold from Ran Singh meant Bengaluru's lead got narrowed down to just five as the teams resumed play. A failed Do-or-Die raid from Rohit Kumar, a back-kick from raiding Ajay Thakur, and a body grab from Mohit Chillar further reduced the deficit to 19-17.

Their hopes of mounting a comeback, however, suffered a major letdown when Ankit raided two players in a single raid and Saurabh Nandal completed his High 5 to restore the seven-point lead.

Tamil Thalaivas succumbed to another All-Out as Pawan Sehrawat completed another Super 10. The home side didn't show any signs of resurgence and happily surrendered to the loss.

With this win, Bengaluru Bulls moved to the second spot in the points table with 27 points from 8 matches. They take on a feeble Puneri Paltans side on Wednesday, who are withering at the bottom of the pile.

Comments
Topics mentioned in this article
Kabaddi
Get the latest updates on India vs Australia Series, check out the India vs Australia Schedule for 2020-21 and Ind vs Aus live score . Like us on Facebook or follow us on Twitter for more sports updates. You can also download the NDTV Cricket app for Android or iOS.