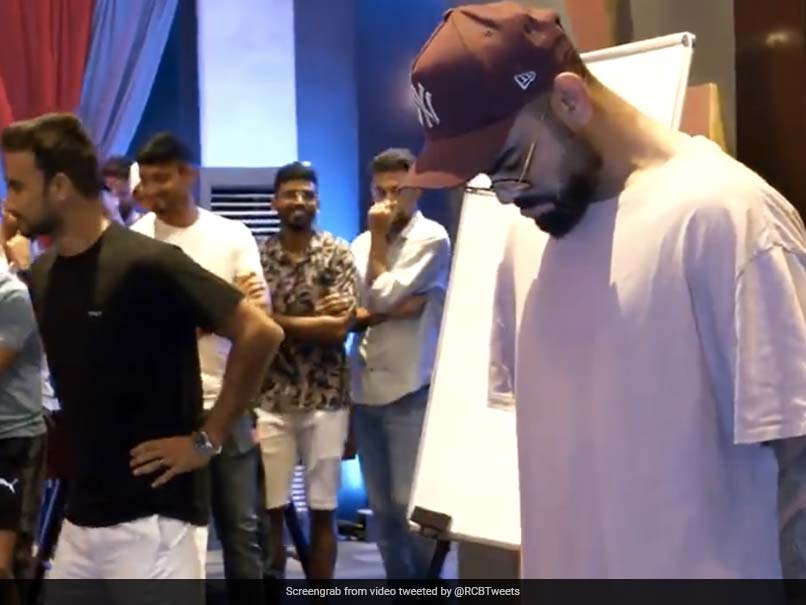 IPL 2021: Virat Kohli was "The Ugly Duckling" in the game of "Supper Theatre" at RCB.© RCB/Twitter

Royal Challengers Bangalore players including captain Virat Kohli, AB de Villiers and Yuzvendra Chahal lead their respective groups in a team bonding session where the players played "Supper Theatre." Each of the three groups had seven players and they were given plays to enact in the team room. Kohli, de Villiers and Chahal showed off their acting skills and in the process pulled off moments that had the audience, comprising of RCB players, their family members and support staff, in splits. While Kohli played "The Ugly Duckling", de Villiers narrated "Cinderella" for his team.

Team Bonding done right! We got our cricketers to perform famous plays from their childhood days. They were absolutely brilliant and hilarious too.

RCB are on a two-match winning streak in IPL 2021 and currently lead the points table with four points.

They won their season opener against Mumbai Indians on April 9 and then defeated SunRisers Hyderabad on April 14.

Led by Kohli, RCB made the playoffs last season but couldn't make the final after losing the Eliminator to SRH.

RCB have benefited from a recent acquisition at the auction, Glenn Maxwell, who was released by Punjab Kings after a disappointing last season.

Maxwell has returned scores of 39 and 59 in what have been two game-changing performances.

RCB found a new hero in their last outing, against SRH, when left-arm spinner Shahbaz Ahmed, who picked three wickets in one over to choke SRH's chase of 150 runs.

He dismissed Jonny Bairstow, Manish Pandey and Abdul Samad in the 17th over to initiate a collapse that SRH could not control.

Harshal Patel, who picked up a five-wicket haul in the season opener, retuned two wickets against SRH.

Yuzvendra Chahal IPL 2021 Cricket
Get the latest updates on ICC T20 Worldcup 2022 and CWG 2022 check out the Schedule, Live Score and Medals Tally. Like us on Facebook or follow us on Twitter for more sports updates. You can also download the NDTV Cricket app for Android or iOS.