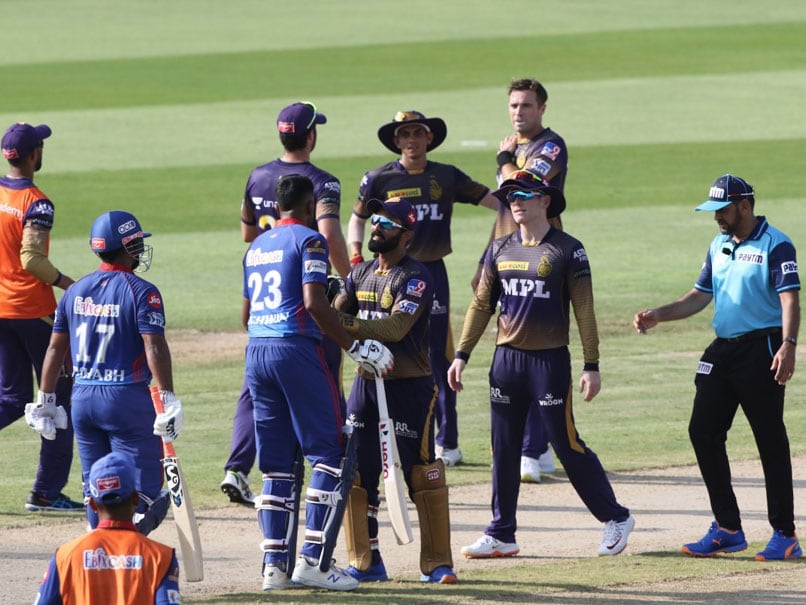 KKR vs DC: An altercation took place on the field between R Ashwin, Tim Southee and Eoin Morgan.© BCCI/IPL

Kolkata Knight Riders (KKR) wicketkeeper-batsman Dinesh Karthik has revealed the reason behind skipper Eoin Morgan and Delhi Capitals' spinner Ravichandran Ashwin's altercation on the field during the Indian Premier League (IPL) 2021 game. Nitish Rana played an unbeaten knock of 36 runs as KKR chased down a target of 128 with three wickets in hand to defeat Delhi Capitals in the 19th over. KKR now has 10 points and is positioned at the fourth spot. "I know that Rahul Tripathi threw the ball and it hit Rishabh Pant and then it ricocheted of that and Ashwin started to run. I do not think Morgan appreciates that, he is someone when the ball hits the batter, he expects them not to run because of the spirit of cricket. It is a very grey area, a very interesting topic. I have my own opinion on it but I can just say I am happy to play peacemaker and thing has come to a good standstill right now," said Karthik during a virtual post-match press conference.

Ashwin and Morgan were involved in a heated exchange after the former was dismissed by Tim Southee in the last over of the DC innings at the Sharjah Cricket Stadium on Tuesday.

DC skipper Rishabh Pant and Ashwin had picked a second run off the last ball of the 19th over and that seemed to have irked the KKR outfit as some consider it to be against the guidelines of Fair Play to take a run when the ball thrown by the fielder ricochets off the batter.

When asked about fitness update on Andre Russell and Lockie Ferguson, Karthik said, "I do not know how bad is the injury of Russell. It is a work in progress, the scans and all are going on. Ferguson should be fine, the serious does not that seem that serious, the match has just ended, the physio will give a proper update in a couple of hours."

Earlier, Lockie Ferguson, Sunil Narine, and Venkatesh Iyer scalped two wickets as Delhi Capitals was restricted to 127/9 in the allotted twenty overs. For Delhi, skipper Rishabh Pant top-scored with a knock of 39 runs from 36 balls.

Talking about the innings of Nitish Rana, Karthik said, "Yeah, I think he played a really sensible knock. The good thing was that he stayed not out. Just the way he was able to handle pressure, it was nice to see him mature. The most important is in his life is that he wants to get into the national team and make a name for himself and hence he needs to keep on producing these knocks."

KKR will next face Punjab Kings on Friday in the IPL.