IPL 2021: Hardik Pandya Has Not Bowled In IPL Due To A Shoulder Niggle, Says Mahela Jayawardene

IPL 2021: Mumbai Indians head coach Mahela Jayawardene said Hardik Pandya did not bowl in the team's first three games this season due to a shoulder niggle he picked up during India's third ODI against England last month. 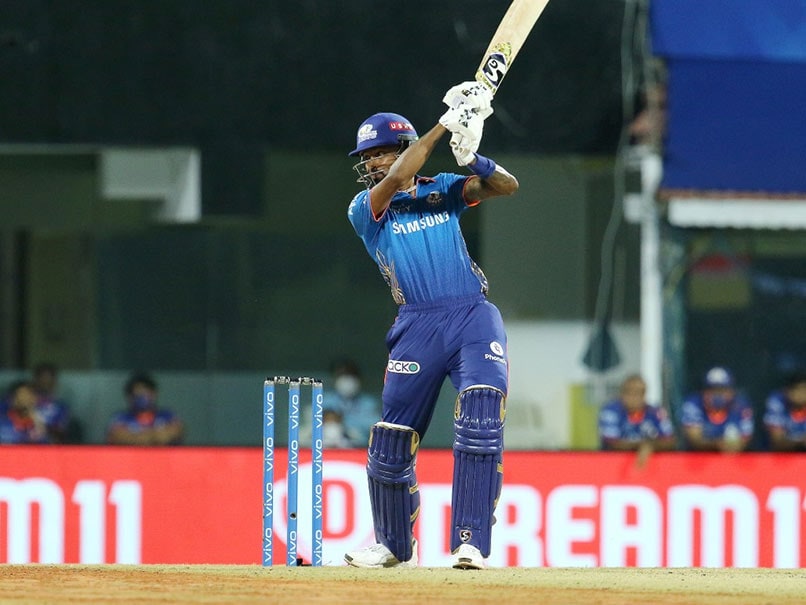 IPL 2021: Hardik Pandya has contributed only with the bat for Mumbai Indians so far this season.© BCCI/IPL

All-rounder Hardik Pandya has not bowled in the last three IPL games due to a shoulder niggle that he picked up during the final ODI against England, said Mumbai Indians head coach Mahela Jayawardene on Monday. "We were looking forward for him to be bowling this season... he was coming back from an injury already, but after those matches against England, the last ODI, I believe he picked up niggle, so that is something that we are nursing at the moment," Jayawardene said during a virtual press-conference. The former Sri Lankan batsman, however, hoped that Hardik will be able to return to bowling in the next few weeks.

"We don't want to risk it, because it is important that we make sure that he (Hardik) is in a position to comfortably come in and bowl. So hopefully in the next few weeks, with a bit of work and all that, we might see him bowling," he said.

"It is not that we are deliberately trying to not bowl him, we would love to have him bowling, but as soon as the niggle is off and he is comfortable, we should be able to use that asset as well."

The 27-year-old from Baroda, however, has been in the thick of things and had effected two key run-outs, dismissing David Warner and Abdul Samad, in his team's 13-run win over Sunrisers Hyderabad in their last game.

"We have always used Hardik on the boundary line because of his speed and he has a good throwing arm and his catching ability," Jayawardene said.

"Last few games, because he has a niggle in the shoulder, we kept (him) in 30 yards and he has proved the value of that by picking up a few runs-outs, because he is agile."

Rahul Chahar has claimed seven wickets in the last two games and Jayawardene said the young leg-spinner has shown improvement in his bowling.

"When we started playing him (Chahar), I believe it was the 2019 season, where he had a breakthrough season, even in the UAE in the last season, he bowled well but he had his ups and downs, he wasn't consistent in execution, but every year we see improvement in Rahul," he said.

"Mind you, he is still a young player and he is also learning, he gets challenged by different oppositions, some top-class players.

"It is constant learning for Rahul, but very happy the way he has come out and he is one of our leaders in that bowling group, specially in that spin department with Krunal (Pandya)."

Mumbai Indians middle-order misfired in their last game but Jayawardene said it was just an off day and he was overall happy with the performance.

"Overall, we are very happy, but knowing Rohit he will push the guys, every-time that we haven't hit those marks, he will bring that up and he wants us to improve and that is the team culture that we have. There are areas where we could improve," the 43-year-old said.

Talking about the wickets in Chennai, Jayawardene said: "They are not unplayable wickets, they are good, competitive wickets. And (adapting) to challenges is always the key for any batsmen or any team.

"We have been consistent with that approach, it is challenging, but our bowlers have adapted pretty well."

Mumbai Indians will take on Delhi on Tuesday.

Mahela Jayawardene Rahul Chahar IPL 2021 Cricket
Get the latest updates on Olympics 2020, Olympics 2020 Medal Tally, Live Cricket Score . Like us on Facebook or follow us on Twitter for more sports updates. You can also download the NDTV Cricket app for Android or iOS.