IPL 2021: Chris Gayle put on his dancing boots as he grooved to Michael Jackson's hit song "Smooth Criminal", even pulling off the famous 'moonwalk'. 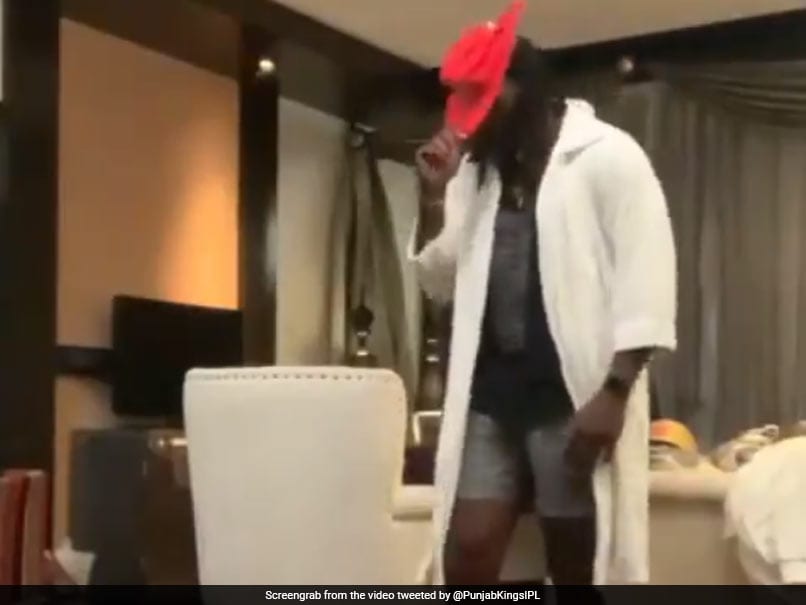 IPL 2021: Chris Gayle was at his groovy best as his quarantine came to an end.© Twitter

Punjab Kings' Caribbean star Chris Gayle's quarantine came to an end and the "Universe Boss" decided to celebrate in style. In a video shared by the franchise, Gayle impresses with his dance to the Michael Jackson hit song "Smooth Criminal". The 41-year-old, known to love partying and dancing, slays the performance, even doing Michael Jackson's famous moonwalk to near-perfection. "Quarantine da khatam khel, bahar aa gaye tuhadde favourite - Chris Gayle," Punjab Kings captioned the video on Twitter, along with a dance emoji.

Despite not playing for a run of games at the start of the season, Gayle turned in some crucial performances with the bat for Punjab Kings in IPL 2020, despite playing at no.3 instead of his usual opening slot.

He posted a highest score of 99 in the loss against Rajasthan Royals.

Gayle is set to play a big role again in IPL 2021, as the PBKS look to improve upon their performance last year and reach the playoffs.

Punjab Kings went big in the mini-auction ahead of the season, signing Australian pacers Riley Meredith and Jhye Richardson in addition to the no.1 ranked T20 International batsman, Dawid Malan.

They have also got Tamil Nadu batsman Shahrukh Khan for Rs 5.25 crore after he shone in the Syed Mushtaq Ali Trophy.

PBKS will begin their season against Rajasthan Royals on April 12 at the Wankhede stadium in Mumbai.

Chris Gayle Cricket
Get the latest updates on Fifa Worldcup 2022 and check out  Fifa World Cup Schedule, Stats and Live Cricket Score. Like us on Facebook or follow us on Twitter for more sports updates. You can also download the NDTV Cricket app for Android or iOS.