Mumbai Indians coach Mahela Jayawardene said the team is in no hurry to force Hardik Pandya into bowling as he might "struggle" if pushed hard. 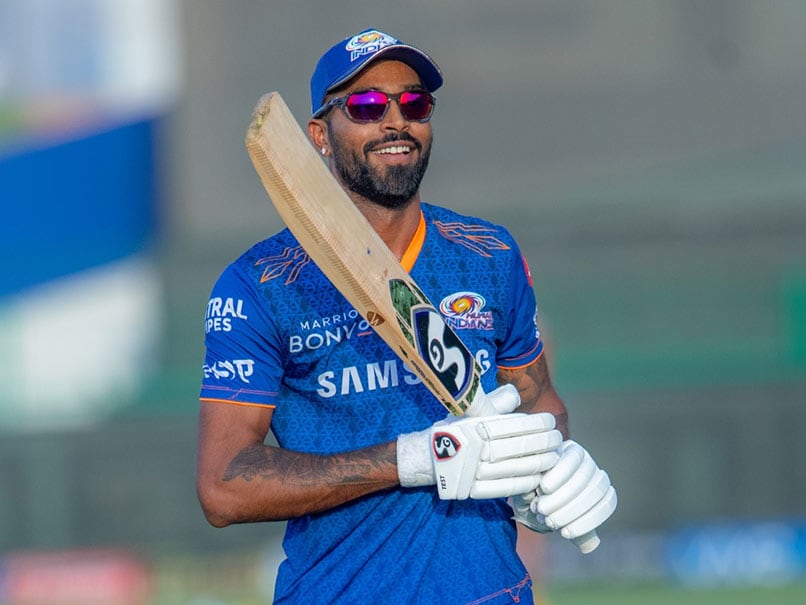 Hardik Pandya hasn't been used as a bowler by Mumbai Indians in the IPL 2021 season.© IPL

Mumbai Indians coach Mahela Jayawardene on Friday said the team is in no hurry to force Hardik Pandya into bowling in the IPL as the all-rounder might "struggle" if pushed hard, which could jeopardise his outing in the upcoming T20 World Cup. After missing the first two games in the second leg of the tournament, Hardik played for MI purely as a batsman. This has raised questions over his selection in India''s T20 World Cup squad, with the chairman of selectors saying that Hardik is fully fit to bowl in the marque event, starting October 17 in the UAE and Oman.

But Jayawardene felt otherwise and said that the Mumbai franchise is in constant touch with the Indian team think tank regarding Hardik.

"He (Hardik) hasn''t bowled for a long period of time, so we are just trying to do the best for Hardik. We are in constant touch with the Indian team management on Hardik''s case," he told reporters during a virtual press conference ahead of the title holder''s next game against Delhi Capitals here on Saturday.

"Whether he will bowl in the IPL or not we will look on a daily basis. I feel at the moment if we push him too hard, he might struggle."

Ever since his return from a back surgery that he underwent in 2019, Hardik hasn't been bowling as much as he used to. However, he had bowled regularly during the five-match T20 series against England in March earlier this year before rolling his arm over once in the ensuing three-match ODI series as part of his workload management.

But he didn't bowl in the first leg of the IPL in India and continues to be unused in the UAE as well.

Mumbai are enduring a nightmarish second leg, having won just one out of the four games here. The defending champions are currently out of the top four, placed fifth in the standings with 10 points from 11 games.

The Rohit Sharma-led side would look to stay in the play-offs race after securing their first win in the second phase.

"Getting the win under out belt was very important. We are as charged up as we were at the start of the tournament. We did a lot of good things in our last game but still a lot of improvements needed.
"We will have to play our best cricket to make it to the top four," Jayawardene said.

Batting has been a big letdown for the record five-time IPL champions with people like Suryakumar Yadav badly struggling with scores of 0, 8, 5, 3 in the UAE leg.

"He (Surya) is a very important player for us but many cricketer goes through such phases including me. I understand his focus is good and it''s just about spending time on the middle," the coach said.

Jayawardene agreed that the surfaces this season in the UAE are quite different from last year and must have been prepared keeping the T20 World Cup in mind.

"The surfaces are slightly different from last year. We are seeing extra bit of grass. Probably, it is done to protect the surfaces as the T20 World Cup is just three weeks away.

"The T20 World Cup is a neutral tournament, an ICC event so they are just trying to get the best possible surfaces," he said.

Mahela Jayawardene
Get the latest updates on ICC Women's Cricket World Cup 2022 and IPL 2022, check out the Schedule , Live Score and IPL Points Table. Like us on Facebook or follow us on Twitter for more sports updates. You can also download the NDTV Cricket app for Android or iOS.