Mumbai Indians Post Adorable Picture Of Rohit Sharma, Other Players With Their Daughters

Mumbai Indians posted a picture of Rohit Sharma, Dhawal Kulkarni and Aditya Tare with their daughters. 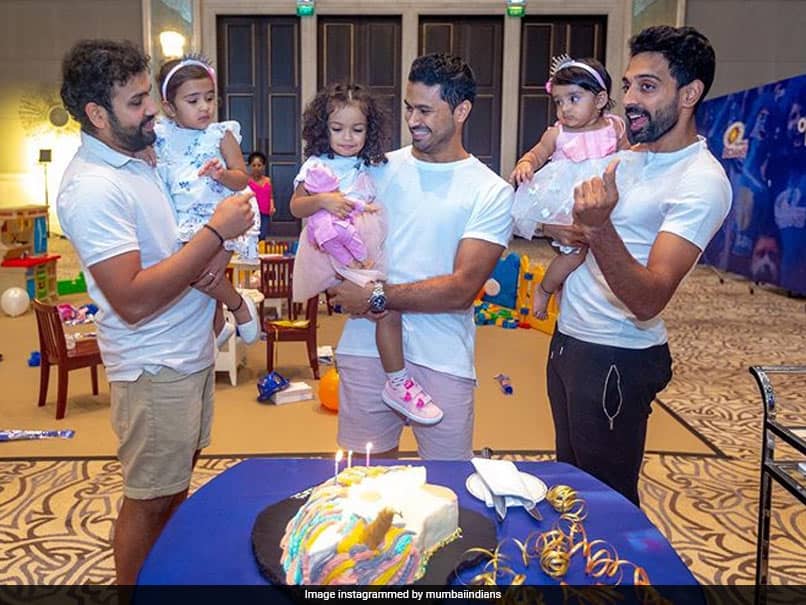 Mumbai Indians posted an adorable picture of three fathers with their daughters in their arms.© Mumbai Indians/Instagram

Mumbai Indians posted an adorable picture of three father-daughter duos celebrating a birthday. Rohit Sharma and his daughter Samaira, Aditya Tare and his daughter Rabbani, and Dhawal Kulkarni and his daughter Nitara were all seen in the picture with a birthday cake placed in front of them. The daughters in their fathers' arms shot up the cuteness quotient of the picture. Mumbai Indians have spared themselves precious time ahead of the Indian Premier League (IPL) 2020 final by winning the Qualifier 1 on November 5 to book a place in the summit clash.

Rohit, who recently returned from a hamstring injury, has had little match practice ahead of the final and that something Mumbai's opponents - SunRisers Hyderabad or Delhi Capitals depending on the result of the Qualifier 2 on Sunday - could take advantage of.

However, Mumbai have an in-form line-up with the likes of Quinton de Kock, Ishan Kishan, Suryakumar Yadav, Kieron Pollard and Hardik Pandya all in form with the bat while Trent Boult and Jasprit Bumrah firing on all cylinders with the ball.

Kishan and de Kock are tied on 483 runs this season and occupy the fourth and fifth positions on the run scorers' charts with Kishan having a higher average and strike rate than de Kock.

Bumrah is the owner of the Purple Cap with 27 wickets from 14 matches while Boult isn't too far behind with 22 wickets from 14 games, occupying the third spot on wicket-takers' chart.

Kagsio Rabada, who could be the Mumbai duo's opponent in the final on November 10, separates the two on the wicket-takers list with 25 wickets from 15 games.

Aditya Tare IPL 2020 Cricket
Get the latest updates on IPL 2021, IPL Points Table , IPL Schedule 2021 , live score . Like us on Facebook or follow us on Twitter for more sports updates. You can also download the NDTV Cricket app for Android or iOS.