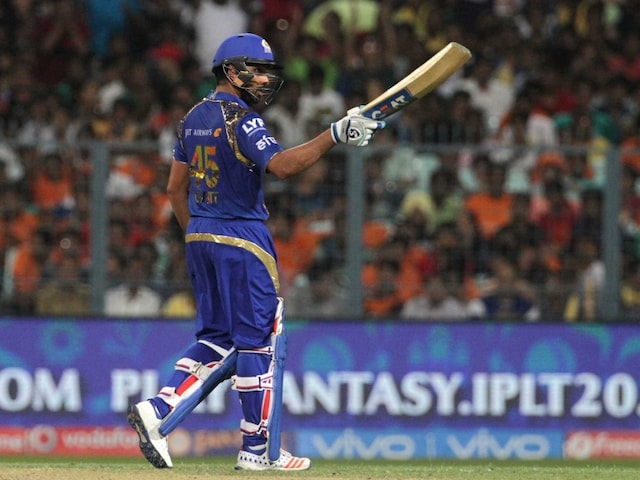 Rohit Sharma and his men will be looking to lift the Indian Premier League (IPL) title for a record third time when they take on Rising Pune Supergiant (RPS) at the Rajiv Gandhi International Stadium in Hyderabad on Sunday. Cruising past Kolkata Knight Riders (KKR) in the eliminator on Friday night, Mumbai Indians have entered their fourth IPL final. Mumbai Indians have been clinical throughout the tenth edition of the league and look confident more than ever to win the trophy.

Enroute to his final destination, Rohit Sharma uploaded a photo of him with his wife captioned as "Off to the last hurdle." Praising his team's performance Rohit had said that his players have performed brilliantly in all the departments.

Off to the last hurdle

Registering 10 wins in 14 matches, Mumbai had topped the table with 20 points. Despite having a good run in the tournament, Mumbai faltered thrice at the hands of Pune. Steve Smith and his company were the only team in the IPL who managed to beat the formidable Mumbai Indians, twice in the league stage and once in the Qualifier 1. Unnerved by the past defeats, Mumbai would like to seize the opportunity and get their hands on the coveted title again.

Mumbai Indians have won the IPL twice before in 2013 and 2015, by beating Chennai Super Kings on both occasions. Though the Maharashtra Derby is more of a Rohit Sharma vs Steve Smith affair, it is also Rohit Sharma vs MS Dhoni. Interestingly, Dhoni and Rohit have been part of six T20 final wins in their career. Touted to be a high octane clash, both Dhoni and Rohit will look to get one more win under their belt to lead the other.

Comments
Topics mentioned in this article
Mumbai Indians Rohit Sharma IPL 2017 Cricket
Get the latest Cricket news, check out the India cricket schedule, Cricket live score . Like us on Facebook or follow us on Twitter for more sports updates. You can also download the NDTV Cricket app for Android or iOS.