Harsh Goenka faced severe backlash from fans of the wicketkeeper-batsman for his remarks. Sensing the mood of MS Dhoni and Pune supporters, Goenka did a U-turn after Dhoni took Pune home against defending champions Sunrisers Hyderabad with an unbeaten fifty. 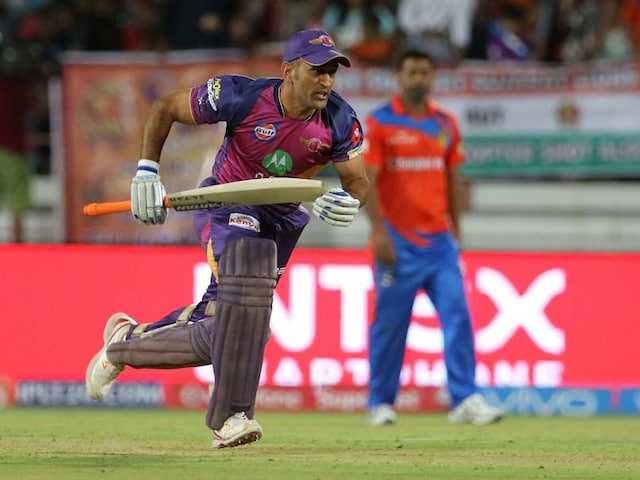 MS Dhoni has not been at his best in the 10th edition of the IPL.© BCCI

Industrialist Harsh Goenka, brother of Rising Pune Supergiant owner Sanjeev, was recently in the news for his remarks about former India captain Mahendra Singh Dhoni. After Pune beat the Mumbai Indians early in the Indian Premier League (IPL) Season 10, Goenka took to Twitter to take a dig at Dhoni.

'Smith proves who's the king of the jungle. Overshadows Dhoni totally. Captains innings. Great move to appoint him as captain,' Goenka had tweeted. He did not stop here. As RPS lost their second match against Kings XI Punjab by six wickets, Goenka shared screenshots of the strike-rates of Pune players this season.

Goenka faced severe backlash from fans of the wicketkeeper-batsman for his remarks. Sensing the mood of Dhoni and Pune supporters, Goenka did a U-turn after Dhoni took Pune home against defending champions Sunrisers Hyderabad with an unbeaten fifty.

"Masterful innings by Dhoni. Great to see him back in form. Nobody can be a greater finisher. Takes @RPSupergiants to a nail-biting win," Goenka tweeted after Dhoni had crafted a brilliant come-from-behind win for RPS.

On Wednesday, fans noticed another interesting retweet from Goenka's handle. After Rookie batsman Rahul Tripathi played a breathtaking knock of 93 to single-handedly take Pune to a four-wicket win over Kolkata, a fan wrote to Goenka, 'Making Smith captain has brought young Indian talent of RPS else people like tripathi and Sundar would have warmed bench'.

While retweets are not endorsements, Goenka promptly offered that tweet a wider audience.

@hvgoenka Making Smith captain has brought young Indian talent of RPS else people like tripathi and Sundar would have warmed bench.#RPSvKKR

Dhoni's fans were yet again angered by that post.

@pramod_kadime @hvgoenka So , in a squad which doesnt have more international players , who wud u rather play in ur eleven ?? may be u r anti dhoni ,so such posts

@pramod_kadime @hvgoenka Last season it was injury which effected the team else MS bhai can never be compared with these monkeys like smith.

Born in Ranchi and raised in Maharashtra, the 26-year-old Tripathi, who made IPL debut this season, showed fine composure as he held on despite wickets falling around him -- Ajinkya Rahane (11), Steve Smith (9), Manoj Tiwary (8), last match's hero Ben Stokes (14) and MS Dhoni (5).

That Tripathi has a higher strike-rate than the likes of David Warner, Brendon McCullum, Jos Buttler, Kieron Pollard, AB de Villiers, Chris Gayle this season sums up his performance of the youngster who was bought at a base price of Rs 10 lakh at the IPL auction.

Comments
Topics mentioned in this article
Rising Pune Supergiant MS Dhoni Cricket IPL 2017
Get the latest Cricket news, check out the India cricket schedule, Cricket live score . Like us on Facebook or follow us on Twitter for more sports updates. You can also download the NDTV Cricket app for Android or iOS.