Two explosive centuries from AB de Villiers and Virat Kohli powered the Royal Challengers Bangalore to a record 144-run win over Gujarat Lions to keep their chances of qualifying for the Indian Premier League knockouts alive. Catch all the highlights of RCB vs GL here.

Virat Kohli and AB de Villiers broke several records to guide Royal Challengers Bangalore to 248/3. In reply, Chris Jordan and Yuzvendra Chahal demolised the Gujarat Lions batting by clinching seven wickets together to help RCB to the biggest win in the Indian Premier League, in terms of runs, at the M. Chinnaswamy Stadium on Saturday. Catch all the highlights of RCB vs GL here. (SCORECARD | STANDINGS | NEWS | PLAY FANTASY LEAGUE)

19:30 hrs IST: That is all from us here this evening. Join us for the next match between KKR vs RPS. 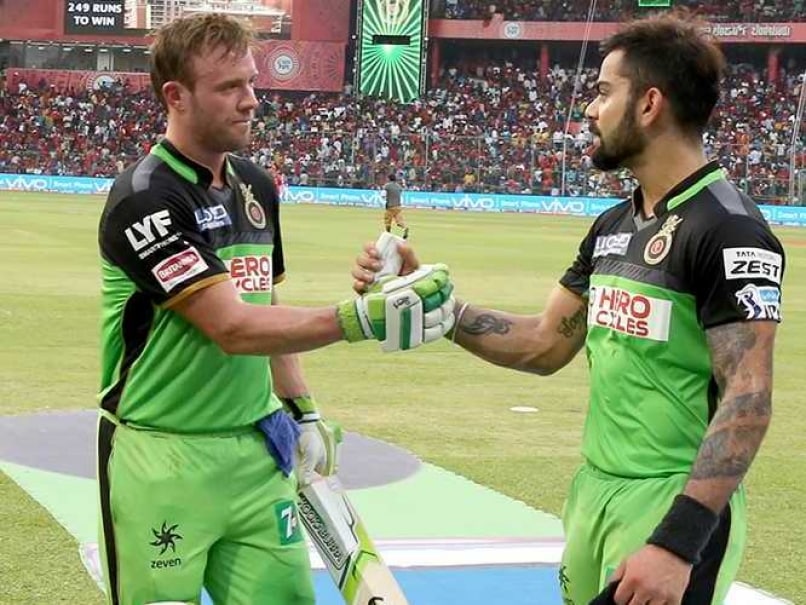 The match belonged to these two greats of the game.

19:28 hrs IST: To know all the records that were broken today read here.

#RCB win by 144 runs, the biggest margin of victory in the #IPL #RCBvGL #PlayBold #RCBGoGreen

19:26 hrs IST: Sachin Baby picked up two consecutive wickets on the last two deliveries of the game to finish it off.

19:24 hrs IST: And what a match this was! It totally belonged to RCB and especially Virat Kohli and AB de Villiers.

19:20 hrs IST: OUT!!! Next ball Shivil Kaushik is caught for a golden duck and that ends the GL innings at 104 all out with eight balls to spare!

19:14 hrs IST: Only six runs in the last three overs! It has been 21 balls since the last boundary too.

19:10 hrs IST:ÂReaction of the crowd in Bengaluru when Virat Kohli reached his century earlier this evening. Worth a watch!

The crowd erupts into thunderous applause after @imVkohli reaches his 3rd ton of this #IPL! #PlayBold #RCBvGLhttps://t.co/pgkI8lvX0s

19:07 hrs IST: With the over rate in mind, Kohli brings in Gayle to roll over his arm!

19:03 hrs IST: RCB are under pressure. Slow over rate and these no balls and wides are not helping!

Not his day with the ball, two no balls, two freehits and a six in the over, #GL 87/8 in 14 overs #RCBvGL #PlayBold #RCBGoGreen

18:53 hrs IST: This is some performance from the Royal Challengers Bangalore. 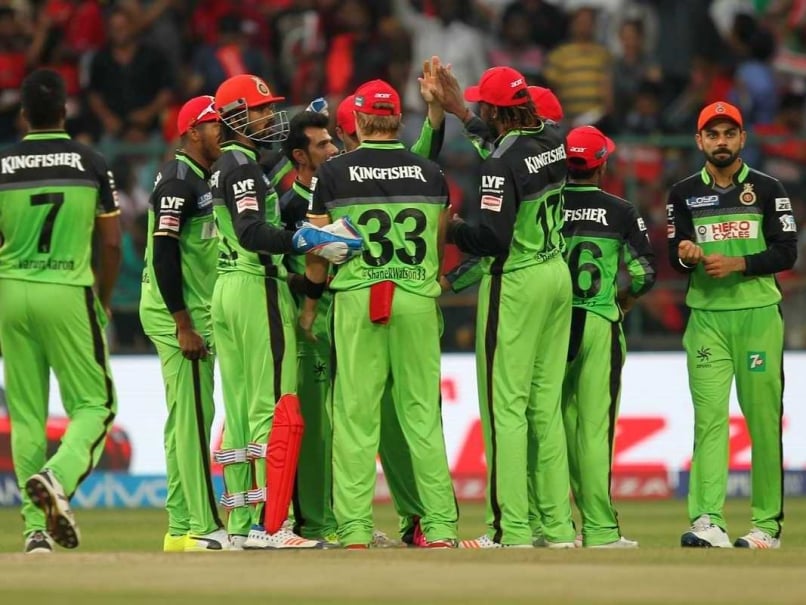 Yuzvendra Chahal ended up with his best figures in the IPL.

18:52 hrs IST: OUT!! Praveen Kumar clean bowled by Chris Jordan who has picked up his third wicket of this evening!

18:44 hrs IST: RCB slowly marching towards victory and they look like they will win quite handsomely!

At 47/5, this match is now slipping out of our hands. @DJBravo47 gets out as well. #RCBvGL

18:26 hrs IST: Three wickets in seven balls! Karthik, Jadeja and Bravo all back in the pavilion!

.@imjadeja has been promoted up the order. He's in at the no.3 position today. We need a partnership! #GameMaariChhe #RCBvGL

17:56 hrs IST: Will they be able to replicate what Kohli-deVilliers did some time back?

17:55 hrs IST: Action begins. Smith and McCullum are out there for GL. 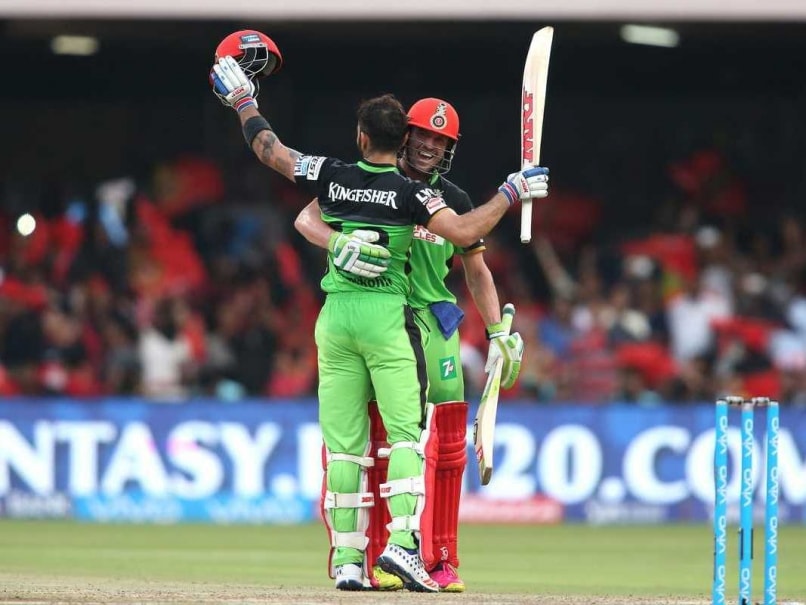 17:47 hrs IST: What Kohli and de Villiers did out there is just super human stuff. Newspapers will be flooded with statistics tomorrow morning!

17:44 hrs IST: This is the second highest total in IPL. The first was also by RCB!

17:43 hrs IST: AB on the other hand remained unbeaten on 129 off 52 balls! He gave most of the strike at the end to Virat Kohli to score his century.

17:42 hrs IST: The last over gave 15 runs but also clinched two wickets that off Kohli (109 off 55) and Watson who was caught behind on his first and the last ball of the innings!

17:25 hrs IST: This is insane hitting from RCB, especially de Villiers! 30 runs off that 18th over! Three sixes and a four!

17:10 hrs IST: Praveen Kumar back into the attack!

16:55 hrs IST: De Villiers have now reached their 20th half-century in the IPL! What a player!

At the end of 10 overs, RCB are 76/1. This partnership looking dangerous for the Lions. #GameMaariChhe #RCBvGL

16:47 hrs IST: FOUR! These 2 are scoring boundaries at will against the GL bowlers!Â

16:45 hrs IST: Overcast conditions right now in Bengaluru. Hope there is no rain!

16:42 hrs IST: The RCB batsmen are taking some risky runs out there! But they are making it to the crease on time!

16:41 hrs IST: Is that OUT?!!! Good piece of bowling and stumping by Dinesh Karthik but AB de Villiers was inside the crease! That was close.

16:40 hrs IST: If these two remain at the crease RCB are going to end up with a big score on the board.

15:42 hrs IST: The equation is simple for both teams. A win for Gujarat Lions will put them in the knock-outs while a loss for Royal Challengers Bangalore will put them out of the reckoning for the play-offs.

15:34 hrs IST: Out of the 11 games in the IPL, Virat Kohli has won the toss only thrice. This is their Green Match and the Royal Challengers Bangalore team have worn the Green jersey.

15:30 hrs IST: A warm welcome to the match between Royal Challengers Bangalore and the Gujarat Lions. The news is that Gujarat Lions have won the toss and have chosen to bowl. 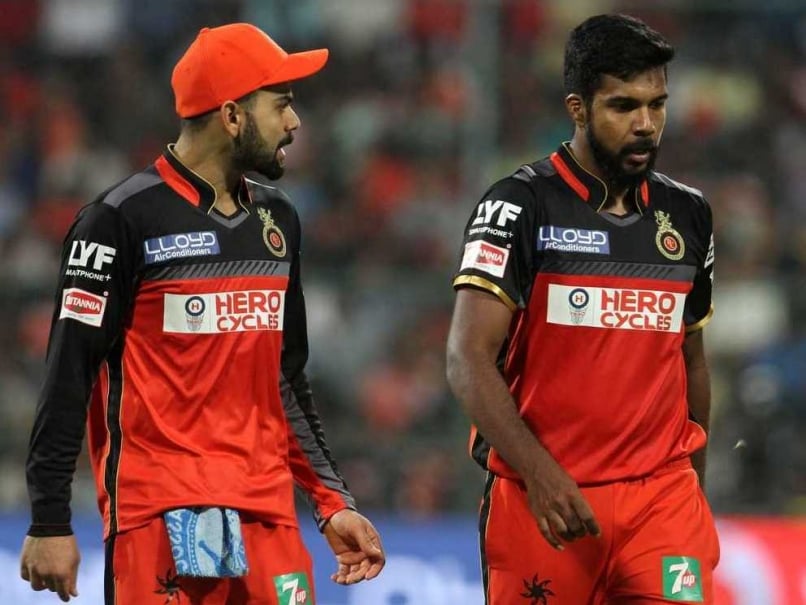 Royal Challengers Bangalore captain Virat Kohli would expect his bowlers like Varun Aaron to be more effective against Gujarat Lions in IPL.

After losing to Mumbai Indians on Wednesday, Virat Kohli said he loves challenges and he will relish the tough IPL path as teams battle for playoff spots. Saturday will be the first of RCB's big battles.

The last time Gujarat Lions and Royal Challengers Bangalore met in Rajkot, GL chased down RCB's 180 for 2 with ease. The Lions won by six wickets, with crucial contributions from the top order.

Playing his first game, West Indian Dwayne Smith hit 32 off 21 balls and Brendon McCullum scored 42 off only 24 balls to maintain a speedy run-rate.

A 40-run stand between McCullum and Raina and a 53-run partnership for the third wicket between Dinesh Karthik (50 not out) and the Gujarat skipper took the Lions to the brink of victory.

Chris Gayle's poor form - he hasn't crossed 10 this season - has been a setback but RCB's bowling has been inconsistent. The inability to check runs has hurt the team even after RCB has set big targets to the opposition. Bowling has been RCB's biggest problem

GL, seven wins from 11 games, will be without Suresh Raina on Saturday. But that should not worry the Lions camp. McCullum will surely lead the way both with his batting and leadership skills.

RCB must look for a perfect day's T20 cricket.

Comments
Topics mentioned in this article
Live Cricket Score Live Blogs IPL 9 Gujarat Lions Royal Challengers Bangalore Virat Kohli Cricket
Get the latest updates on SA vs IND 2021-22, check out the Schedule and Live Score . Like us on Facebook or follow us on Twitter for more sports updates. You can also download the NDTV Cricket app for Android or iOS.