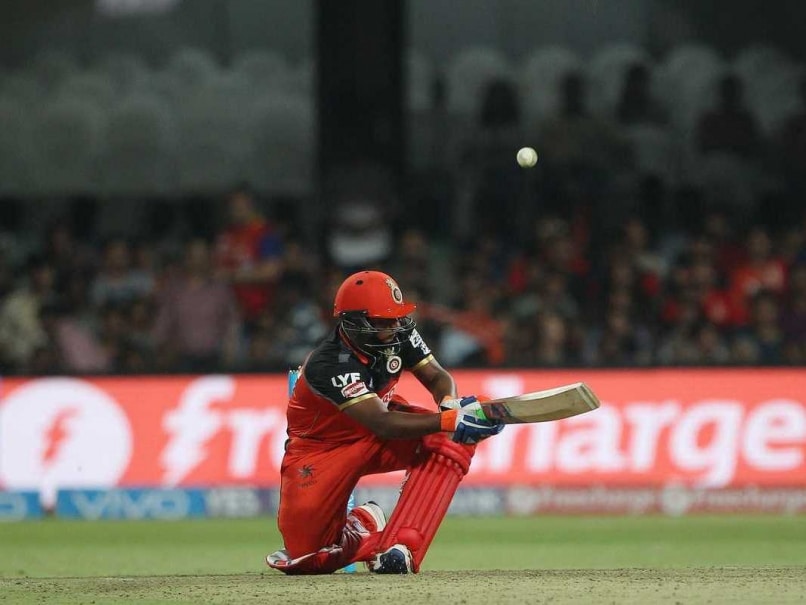 Sarfaraz Khan scoops a shot in his 10-ball 35 not out cameo for the Royal Challengers Bangalore on Tuesday.© BCCI

But had it not been for Sarfaraz Khan, who struck a quickfire 10-ball 35 not out, the hosts would found it difficult to go past the 200-run mark. (Virat Kohli Lauds Vijay Mallya, Says Royal Challengers Bangalore Stint Exciting)

This is the first 200 plus total and the highest score of the ninth edition of the Indian Premier League so far. (IPL 2016 Live Cricket Score -- Royal Challengers Bangalore vs Sunrisers Hyderabad: Warner Slams Fifty, Keeps SRH In Hunt)

Following the dismissal of explosive West Indian opener Chris Gayle in only the eighth delivery of the match, Kohli and de Villiers notched a brilliant 157-run partnership, which enthralled the packed crowd at the M. Chinnaswamy Stadium.

The second wicket partnership lasted 87 deliveries, which gave the home team a brilliant start to their campaign.

Kohli, who has been in fine form this year for Team India and was also named Player of the Series of the ICC World T20, smashed 75 runs off 51 balls which included seven boundaries and three huge sixes. He was eventually clean bowled by medium pacer Bhuvneshwar Kumar, who had also dismissed Gayle in the second over of the match, but not before he brought up his half-century in 40 balls.

De Villiers, on the other hand, who is famous for his improvised shots to get maximum results, did not get bogged down after the dismissal of Gayle. On the contrary, he formed a solid foundation with Kohli and kept blasting the Sunrisers bowlers all over the park. His knock of 82 off 42 deliveries was studded with seven boundaries and six maximums.

The South African brought up his half-century in just 26 deliveries and he scored his runs at a staggering strike rate of 195.23.

With the partnership broken, de Villiers could not maintain the momentum and got out after a few minutes after Kohli's dismissal.

Their partnership is the second highest at M. Chinnaswamy Stadium with highest being 167 between Gayle and Sri Lanka's Tillakaratne Dilshan in 2013 for the Royal Challengers.

This is not the first time the duo of Kohli and de Villiers have notched such a big partnership. They also hit 103 against the Delhi Daredevils in 2013.

And one must not forget the 2015 match against Mumbai Indians when the duo smashed an unbeaten partnership of 215 at the Wankhede Stadium to take RCB to 235/1 in 20 overs.

De Villiers had blasted an unbeaten 133 off 59 balls, which included 19 fours and four sixes. Kohli had scored a classy 82 not out off 50 balls.