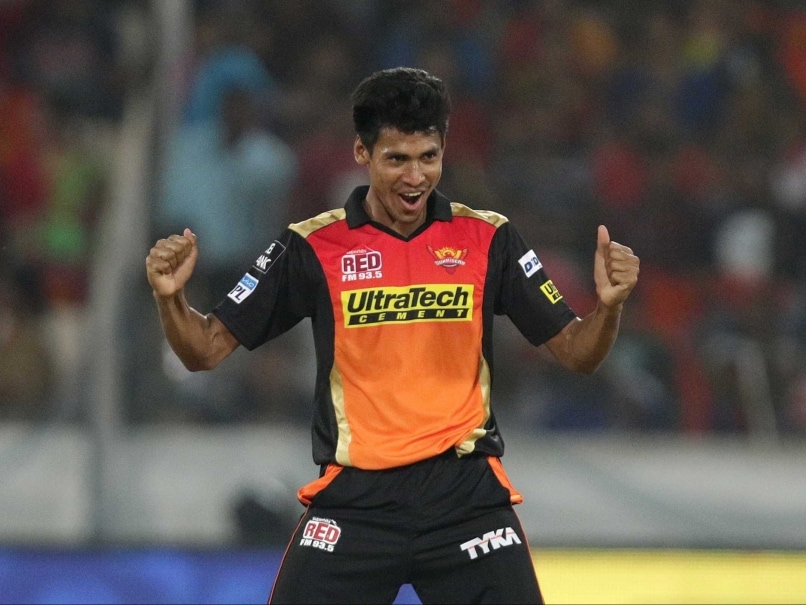 Mustafizur Rahman was named Man of the Match for figures of 4-1-9-2 on Saturday.© BCCI

Electing to bowl first, the SRH bowlers dished out a superlative bowling effort to restrict Kings XI Punjab to 143 for six in their stipulated 20 overs and then returned to overhaul the target, reaching 146-5 with 13 balls to spare.

Chasing 144 to win, Warner (59 off 31balls) and Dhawan (45 off 44 balls) shared a match-winning 90-run opening partnership off just 59 balls to lay the foundation of the runchase at the Rajiv Gandhi International stadium here.

Kings XI picked up the openers and also dismissed Aditya Tare (0) to reduce the hosts to 115-3 in 14 overs. But then Eoin Morgan (25) and Deepak Hooda (5) took the hosts closer to the target adding 24 runs for the fourth wicket.

However, both were dismissed in the 17th over and in the end it was Moises Henriques (5) who hit a four to pick up the winning runs as Sunrisers registered their third successive victory, while Kings XI Punjab succumbed to yet another loss, their fourth defeat in five matches in IPL-9.

Earlier, Henriques scalped two wickets, while Bangladesh pacer Rahman claimed two wickets, including a wicket in a maiden over, giving away just nine runs to restrict the visitors to 143-6.

Put into bat, Shaun Marsh (40 off 34 balls) was the top-scorer for Punjab with three boundaries and two huge sixes, while all-rounder Axar Patel's unbeaten 36 off 17 balls lower down the order laced with three sixes and a four helped them put a decent score on board.

Manan Vohra, who has been consistent for KXIP this season, contributed 25 runs that had a six and three fours.

As the side struggled following the exit of Captain David Miller and Glen Maxwell, young Nikhil Nayak (22) gave good company to Patel, sharing 50 runs, to help the side reach 143.

The Punjab side suffered an early setback with its opener Murali Vijay returning to the pavilion in the third over by Bhuvneshwar Kumar. Vijay paid the price for his poor shot as wicket keeper Naman Ojha took a simple catch.

Other opener Vohra was run out in the sixth over bowled by Mustafizur Rahman following some brilliant fielding by Shikhar Dhawan, whose direct throw found him short of crease.

The KXIP suffered another major setback in the 10th over when Henriques dismissed struggling duo of skipper Miller (9) and Glen Maxwell (1) in the same over.

Marsh, who appeared set for a big innings, was then trapped infront of wicket by Rahman in the 14th over.

But the duo of Nayak and Patel played their useful role to take the innings forward.