Mahendra Singh Dhoni (Pune) and Suresh Raina (Rajkot) will play against each other for the first time in the IPL. Similarly, Ashwin (Pune) and Ravindra Jadeja (Rajkot) will be rivals. Catch all the highlights of the IPL 2016 Players Draft here.

Written by Jepher Christopher Nickels
Read Time : 5-min
Mahendra Singh Dhoni and Ravichandran Ashwin will team up once again in the IPL. © AFP

While Mahendra Singh Dhoni will play for Pune next season, Suresh Raina will be seen in action for Rajkot. The two will play against each other for the first time in the IPL. Catch all the highlights here.

1246 hrs IST: James Faulkner - Right-arm medium pacer James Faulkner is aware of the Indian conditions well and loves to exploit it. He has two five-wicket hauls and in the tournament. Faulkner's bowling variation, specially his change-in-pace deliveries at the death makes him one of the most lethal properties in the world cricket. He was key to Australia's World Cup triumph earlier this year. Faulkner is also a handy batsman. M: 45, W: 51, Avg: 26.53

1241 hrs IST: Brendon McCullum - It will be wrong or rather a poor decision to leave out Brendon McCullum from playing XI. He blasted off a whirlwind century in the inaugural edition of the IPL and was a potent threat at the top of the order along with Dwayne Smith in the last season for Chennai Super Kings. The New Zealand skipper may have given up wicketkeeping, but still is a champion fielder. M: 76, R: 2080, Avg: 29.30

1237 hrs IST: Dwayne Bravo is a complete package. Bravo is altogether a different player when it comes to Twenty20s and he has proved that time and again. His bowling average of 21.53 is superb, while he is a dangerous lower-down-the-order batsman. He is an outstanding fielder and not mentioning the catches he took last season will be just wrong. M: 91, R: 1163, Avg: 24.74, W: 105, Avg: 21.53

1235 hrs IST: Ravindra Jadeja has played for several teams. He started his IPL journey with Rajasthan Royals before moving to now-defunct Kochi Tuskers Kerala. He was then picked up by Chennai Super Kings. The left-arm spinner is deadly on turning tracks and is capable of clearing the boundary ropes with ease. M: 111, R: 1383, Avg: 23.44, W: 67, Avg: 27.55.

Excited to play for the beautiful vibrant city- Rajkot in @IPL. Looking forward to have new teammates and support from the people of Gujarat

1220 hrs IST: That's that! The remaining 40 players go to the auction to be held on February 6 in Bangalore.

1213 hrs IST: Rajkot pick Dwayne Bravo as their fifth and final player at the draft today.

1204 hrs IST: Brendon McCullum becomes first overseas player to be picked. He will play for Rajkot. Steven Smith to play for Pune. Rahane too picked up by Pune.

1158 hrs IST: As expected, MS Dhoni is picked up by Pune franchise. Suresh Raina to play for Rajkot next season.

Less than an hour to go and here's the IPL trophy at the vivo #IPLdraft pic.twitter.com/AkTfjPFaB6

The IPL 2016 players draft will be held in Mumbai and it is pregnant with possibilities. With 50 players available to New Rising (Pune) and Intex (Rajkot), but will Dhoni continue to command the price he did over the years? The fate of 10 players will be decided on Tuesday. The remainder goes to February's auction pool.

Chennai's core players will be in demand. In the shortest format of the game, Dhoni remains a superman. Ravindra Jadeja and Ravichandran Ashwin, whose all-round credentials were proved during the recent series against South Africa, should be among the top picks. Jadeja could actually turn out for his home-town Rajkot.

Do not forget the overseas star. Brendon McCullum, who has smashed a century of sixes in Tests, will be much in demand. The likes of West Indian Dwayne Bravo (Chennai), Aussies Shane Watson, James Faulkner and Steven Smith (all Rajasthan) could steal the big bucks as well. 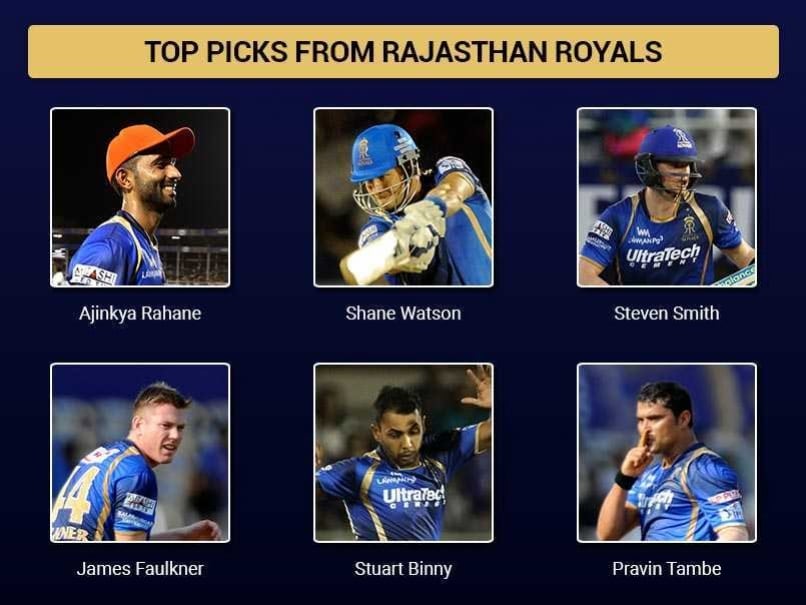 All eyes will be on Ajinkya Rahane during IPL 2016 player draft.

How many players in the draft?

A pool of 50 will be available. The teams choose 10 and the rest go to the auction to be held on February 6 in Bangalore

By virtue of making the best successful bid, New Rising (Pune) gets the right to make the first choice. Then Rajkot (owned by Intex) follows. The teams then take turns till they have chosen five each.

How much can each team spend?

Each team has a purse of minimum 40 crores and a maximum of 66 crores. Technically, Pune and Rajkot need not pick any player from the draft and wait for the February auctions. But that is highly unlikely as the new teams will love to identify a core and build a team around it.

How much can a player earn?