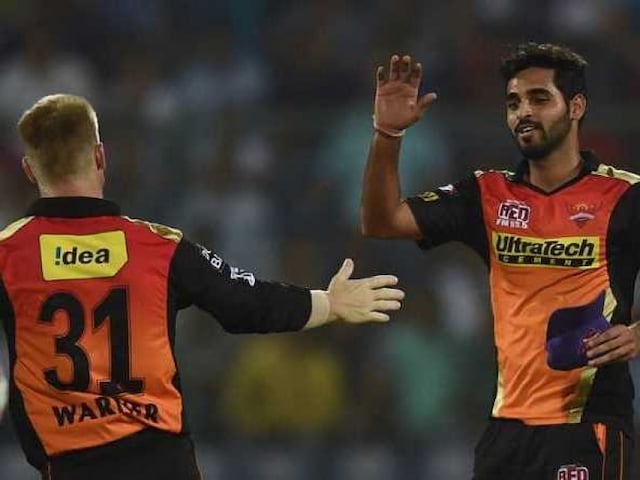 Sunrisers Hyderabad captain David Warner heaped praise on Bhuvneshwar Kumar and said he had utmost faith in the Indian pacer's abilities and passion for the game.© AFP

"Obviously Bhuvi (Bhuvneshwar) is in and out of the Indian team, but he is a world-class bowler. With the new ball as an opening batsman, I would like to come up against him on a wicket like this because he sets the tone from ball one," said Warner at the post-match press conference after leading Sunrisers to their maiden IPL title at the Chinnaswamy stadium.

Warner said as captain of the team, he had utmost faith in Bhuvneshwar's abilities and passion for the game.

"I have got utmost faith in him (Bhuvneshwar) and the way he plays his cricket. He is passionate. He loves the game and, I always rely on him towards the end," said the Australian batsman.

Warner led from the front with a sparkling 69 off 38 balls before Bhuvneshwar and Mustafizur Rahman bowled brilliantly in the death over to register an eight-run win over Royal Challengers Bangalore in the IPL final.

Warner was also effusive in praise for young left-arm pacer Mustafizur, who formed a lethal combination with Bhuvneshwar (23 wickets) for Sunrisers this season.

"Obviously, Mustafizur Rahman is a promising player for Bangladesh. It is a credit to him that he has played outstanding cricket along with Bhuvi. Hope he keeps fit and strong for future games," Warner said.

Chasing the 208 for seven set by Sunrisers, RCB at one stage were cruising at 114 for no loss with Chris Gayle firing at all cylinders.

"Our quest was to maintain composure while Chris Gayle was going after our bowling. I spoke to the bowlers to bowl wide and slower balls but despite that he (Gayle) was striking the ball with power. But we knew if we could get quick wickets, it would be hard on the next batsmen to play shots," Warner said when asked about his strategy following RCB's whirlwind start to the chase.

"It was a fantastic team achievement. To lead this side and the support from the players, me pulling my weight with the runs, it has been a hard journey. It's a team effort. To have the perfect game, we needed to gel. For us, the key was team effort all the way," Warner said.

Asked about the target, Warner said:"Look we knew, we had to get 200. Virat Kohli, what a great leader! I can't take it away from him. He set the benchmark this season. We knew we had to win three straight games. To win in Bangalore, we were underdogs. But, we batted well, bowled and fielded well.

"In 24 hours, I will be off to the Caribbean. Time to have a beer," signed off the Australian.

Comments
Topics mentioned in this article
Royal Challengers Bangalore Sunrisers Hyderabad David Warner Bhuvneshwar Kumar Mustafizur Rahman IPL 9 Cricket
Get the latest Cricket news, check out the India cricket schedule, Cricket live score . Like us on Facebook or follow us on Twitter for more sports updates. You can also download the NDTV Cricket app for Android or iOS.