We will keep trying hard for KKR, says Shah rukh

Khan conceded that after a string of losses, it helps when the whole crowd is behind you especially at the Eden. 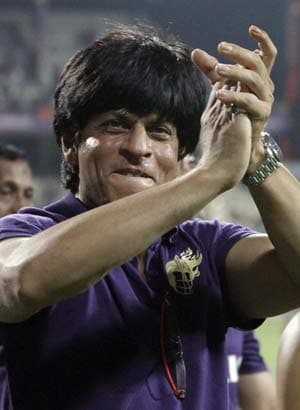 Acknowledging the "backing" and strong support of the Kolkata Knight Riders (KKR) fans, Bollywood superstar Shahrukh Khan has assured his loyal followers that he would "ensure" their faith in the team remained intact.

"I feel extremely responsible that I don't let the fans down. So we will try harder.

"As you know, I can't do much. But the team is doing its best. I think they have been playing well and ensure you are not disappointed. And you go back home extremely happy, as happy as you make us all," Khan said after his team snatched a much-needed victory by defeating Rajasthan Royals at the Eden Gardens here on Friday night.

Khan conceded that after a string of losses, "it helps when the whole crowd is behind you especially at the Eden".

"When we started, Juhi and me, it was 'hum karlenge' (we will do it). But you realise along the way that when good things don't happen then how much it helps when the whole crowd is behind you, especially at the Eden," said Khan.

The Bollywood 'badshah' attributed a "sense of confidence" to the 67,500 fans at the Eden Gardens, who cheered on the home team as they grabbed an eight-wicket win over the Royals.

"Somewhere when things go wrong, it hurts you. You feel bad, but there is a sense of confidence when you come to Eden, and see all these 70,000 people screaming and shouting.

"Everywhere whether it's in this city of Kolkata, all over Bengal, all over the country, on Twitter, on social networking, I do sense, coming from this profession, a feeling of happiness when we win. Extremely humbled, grateful, and you need this kind of backing," Khan said.

"Everyone feels very happy we have been having a little bit of a bad run to say the least. So it's nice to be back in Eden..I was working so I couldn't come down to the matches. So it feels nice when you come down for the matches and you win," the actor added.

Comments
Topics mentioned in this article
Cricket IPL 2013 Shoaib Akhtar Sourav Ganguly Kolkata Knight Riders Ajaysinhji D. Jadeja Shah Rukh Khan
Get the latest updates on ICC T20 Worldcup 2022 and CWG 2022 check out the Schedule, Live Score and Medals Tally. Like us on Facebook or follow us on Twitter for more sports updates. You can also download the NDTV Cricket app for Android or iOS.