IPL 6: We can beat any side, says confident Parthiv Patel

With their campaign all but over after a big home loss to Sunrisers Hyderabad, Kings XI Punjab skipper Adam Gilchrist says his side will now try and play party spoilers for the bigger teams. 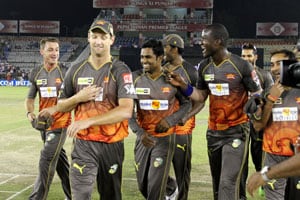 They say 'good things come in small packages' and the way Parthiv Patel's batting on Saturday epitomized the saying. The five-foot-three inch wicketkeeper scored a 47-ball 61 to help set up a 30-run away win for Sunrisers Hyderabad against Kings XI Punjab in Mohali.

Batting on a surface that helped the fast bowlers was not easy but Parthiv's marathon knock gave Hyderabad the belief as they reached a more than challenging 150 for 7.

"'I was supposed to hang in there till the 15th and 16th over. 130-140 was a par score but it was a difficult wicket to bat on. We wanted to get past 140 to give the bowlers a score to defend and Thisara Perera and his sixes came in handy. We knew one of the top order batsman had to stay with him," said Parthiv at the post-match presentation, receiving the Man of the Match award.

Parthiv also challenges other teams to do well against the quality of bowling Hyderabad have in their ranks.

"We are working on our batting. I think we can beat any side now, especially after we score 160 or more while batting first. We play Mumbai next and to beat them will be huge," added the wristy left-hander who hit 2 sixes and 5 fours in his knock.

Sunrisers' skipper on Saturday, Cameron White, who replaced out-of-form regular skipper Kumar Sangakkara, says his side can not rest on their laurels and may still have to win the remaining games to make the playoffs.

"We have been fighting all the way and defending the scores we've put up this entire tournament. Once we dismissed top six of their batsmen, we knew that we could win. We may have a situation we have to win each game to scrape through to the last-4," said White.

Another one of Hyderabad's architects for the win, Darren Sammy credited his teams' never-say-die attitude and bowling mentor Waqar Younis' tips.

"We thought we let them away with too many runs. We lost wickets at bad times, especially myself and Shaun Marsh got out at the wrong time and it hurt us in the end. But now, we aim to play party spoilers as we play the bigger teams in the remainder of the tournament," Gilchrist said after the match.