We are not consistent enough to compete, says Delhi skipper Jayawardena

With just one win in eight games so far, the Daredevils will have to win all their remaining matches to stay in contention for a last-four berth. 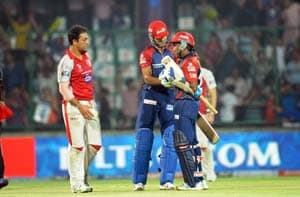 Livid with his batsmen after yet another loss, Delhi Daredevils skipper Mahela Jayawardena said their inconsistency is not letting the side post even a decent total for the bowlers to defend.

The Daredevils slumped to their seventh loss in the Indian Premier League after going down by five wickets to Kings XI Punjab on Tuesday night.

"That's where were we are lacking. We are not consistent enough to compete. This wicket was probably a 140-150 wicket, we needed to get that par score. We are disappointed that we could not get that score and not give our bowlers a chance. Against the bowling attack they had today, 150 was easily a par score," Mahela said when asked about the brittle batting line up that put up just 120 in their home game.

With just one win in eight games so far, the Daredevils will have to win all their remaining matches to stay in contention for a last-four berth.

"We can't think about the (remaining) eight games. We just need to focus on the next game in hand. I think T20 games are mainly won in batting and we are not consistent enough to get at least to the par score and give ourselves a chance," the Sri Lankan said at the post match press conference.

The Daredevils were hoping to build some momentum after they breezed past Mumbai Indians at home on Sunday but their batsmen failed to put a decent score to go down by five wickets against KXIP.

To add to it, the Daredevils injury list seems to growing longer as their middle-order batsman Venugopal Rao has been ruled out from the remainder of the IPL after pulling his hamstring while fielding.

"Venu had hamstring injury at the start of the season. We tested Venu and found him fit. We played him in the last match. He has again pulled his hamstring and is out of the tournament now. He is out for the next three to four weeks," the skipper said.