Virender Sehwag, Ashish Nehra and Naman Ojha were supposed to wear helmets and ride bikes for a small distance to promote safe riding and giving precedence to pedestrians on Zebra crossing. 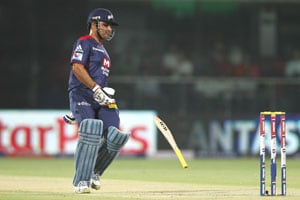 Virender Sehwag was to educate Delhiites on obeying traffic rules but it ended as a flop show as the ace cricketer was mobbed by newsmen following which he left the venue within minutes of his arrival.

As soon as Sehwag and his Delhi Daredevils teammates Ashish Nehra and Naman Ojha reached India Gate, they were mobbed by newsmen who refused to budge even after repeated requests from police personnel and the players themselves.

Nehra and Ojha boarded their cars and left the spot first and Sehwag followed suit after briefly speaking to reporters about the importance of observing traffic rules.

"Whenever you see a person crossing the road through Zebra crossing, you should stop and respect the rule. Accidents can be reduced if we give importance to Zebra crossings. Traffic rules should be followed and one should not drive at high speed," said Sehwag.

The three cricketers were supposed to wear helmets and ride bikes for a small distance to promote safe riding and giving precedence to pedestrians on Zebra crossing.

The cricketers, along with a group of school children were also supposed to distribute road safety literature to Delhiites urging them to follow traffic rules.

Sehwag has just scored one fifty in the ongoing Indian Premier League for the Daredevils, who are out of reckoning for the play-offs.

The programme was part of the observance of 'Global Road Safety Week' by Delhi Traffic Police.

Comments
Topics mentioned in this article
Cricket IPL 2013 Virender Sehwag Ashish Nehra Naman Ojha Delhi Daredevils
Get the latest updates on ICC T20 Worldcup 2022 and CWG 2022 check out the Schedule, Live Score and Medals Tally. Like us on Facebook or follow us on Twitter for more sports updates. You can also download the NDTV Cricket app for Android or iOS.