Umesh Yadav is the most talented fast bowler in India: Ashish Nehra 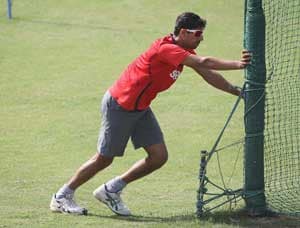 Veteran left-arm seamer Ashish Nehra praised his Delhi Daredevils teammate Umesh Yadav terming him as the "most talented fast bowler" in the country at the moment and believes that his performance will have an impact on India's performance in near future.

"Umesh has done so well and if you ask me personally, he is the most talented bowler for India. If he does well, then it will augur well for India as they will play some important Test matches in coming months," Nehra told reporters ahead of Delhi Daredevils' IPL match against Chennai Super Kings.

As an elder statesman of the side, Nehra said that he loves helping out youngsters like Umesh and Siddharth kaul.

"We have people like Umesh and Siddarth and I look to help them as much as I can. But in this format, the gap between matches is too little and with the amount of travelling, it even becomes difficult for them."

There is no denying that Daredevils have had one of the worst seasons but Nehra believes that they still need to fight it out and "look towards winning the remaining three games."

For Nehra, it's only their opponents Chennai Super Kings who have done consistently well in all six editions of the IPL.

"Only CSK have done well in all season. It is perhaps because they have had "The Team" for the last five or six years. It is not easy. But we had faced so many injury issues this season. It's been a difficult season but you have to take things in your stride in IPL format."

In absence of Mahela Jayawardene (due to TN govt diktat), David Warner will be leading the side for the second match in a row but that has got little do with team's poor show.

"David Warner is an international cricketer and being professional knows how to adjust to various aspects." Asked about another colleague Irfan Pathan, whose selection in the ODI squad for the Champions Trophy has been debated, Nehra said that the Baroda all-rounder is improving with passage of time.

"The way I have seen Irfan bowling earlier, he is getting better by the day. I think in England, Irfan's batting will come in handy. I think that is what the selectors have seen (in picking him for India). We still have three or four weeks before Champions Trophy. He is getting in to the rhythm slowly."

Nehra said that he isn't unhappy with his performance in the IPL this season.

"I will not say that I am unhappy. I was rested for three games and new combinations were tried out. We knew that we are not going to qualify. First two or three games, I was rusty but as long as I am bowling in right areas, I am happy. Hopefully last three games I bowl better."

Comments
Topics mentioned in this article
Cricket Ashish Nehra IPL 2013 Umesh Yadav Siddarth Kaul Delhi Daredevils
Get the latest updates on India vs South Africa and check out  Schedule, Results and Live Score. Like us on Facebook or follow us on Twitter for more sports updates. You can also download the NDTV Cricket app for Android or iOS.