This defeat has shocked us, says MS Dhoni after loss to Pune

The Chennai skipper minced no words in his criticism of his top-order batsmen, who have "regularly failed to give good starts." 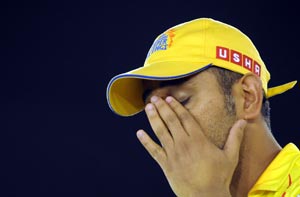 At the MA Chidambaram Stadium in Chennai, Pune Warriors shocked the Super Kings by 24 runs. Chasing 160 to win, Chennai faltered in their batting, leaving their skipper MS Dhoni an unhappy man.

"This defeat has shocked us a little bit. We should have batted better, especially at the start of the chase. The wicket in Chennai slows down so we need to start well.

"Maybe this defeat is a blessing in disguise... it's a good wake-up call early in the tournament," said Dhoni at the post-match presentation. (Also see: Match in pics)

Pune stand-in skipper Ross Taylor said that while the defeat was good, there is still a long way to go for his side. "It was a good overall performance by the boys. Our intensity in the field was excellent and hopefully we can carry this momentum forward.

"But it's a long tournament. We should have Yuvraj Singh and Angelo Mathews back for the next game and that's a positive for us," said Taylor after the game.

Steven Smith was voted Man of the Match for a blistering 16-ball 39 that added a late boost to the Pune innings and he took three catches as well.

"Look, I have been sitting on the sidelines for the first few games so I was very fresh heading in to this match. It was a great team effort and we were particularly good with the bat."

Pune spinner Rahul Sharma, who finished with figures of 1/24, was elated after the win. "CSK is the best team around so this is a fantastic win for us. Coach Allan Donald kept advising me during the game and I stuck to my game plan of bowling wicket-to-wicket."

Comments
Topics mentioned in this article
Cricket Yuvraj Singh Anil Kumble IPL 2013 Gary Kirsten MS Dhoni Angelo Mathews Rahul Sharma Sreesanth Ross Taylor Pune Warriors India Stephen Barry Smith
Get the latest updates on India vs Australia Series, check out the India vs Australia Schedule for 2020-21 and Ind vs Aus live score . Like us on Facebook or follow us on Twitter for more sports updates. You can also download the NDTV Cricket app for Android or iOS.