The city municipal corporation had sealed the I, J and K stands on Sunday after the Supreme Court vacated the stay granted by the Madras High Court in February. 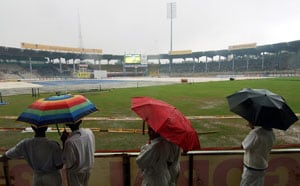 In a major relief for thousands of cricket fans with valid tickets, the Supreme Court today allowed de-sealing of three stands at the MA Chidambaram stadium in Chennai for today's IPL match between Chennai Super Kings and Delhi Daredevils.

The city municipal corporation had sealed the I, J and K stands on Sunday after the Supreme Court vacated the stay granted by the Madras High Court in February.

"In the facts and circumstances of the case that tickets have been sold prior to the interim order of this court in respect of three stands - I , J and K - and in view of the undertaking that these stands shall not be used without permission of authorities and this court we allow the application," the bench said today.

The Tamil Nadu Cricket Association today assured the top court that the three stands with 12,000 seats will not be used in any other match without its permission.

The state government says these stands have been constructed without any approval, but the TNCA said it had obtained permission from the Chennai Corporation to use them during cricket matches till May 22. It had also submitted that stands be de-sealed as the tickets have already been sold for today's IPL match to be played in the stadium, which has this year already conducted seven IPL matches without any hitch.

The Tamil Nadu government has also withdrawn the stability certificate given to all the nine stands at the stadium.

Consequently, the Chennai police too has issued a show cause notice to the Tamil Nadu Cricket Association (TNCA) asking why the match shouldn't be cancelled as the PRL (Public Resort License) issued by the police have been withdrawn now.

The Madras High Court would hear TNCA's petition challenging the cancellation of stability certificates to all nine stands and the Chennai police's show cause notice.

Comments
Topics mentioned in this article
Cricket IPL 2013 Chris Gayle Chennai Super Kings Delhi Daredevils
Get the latest updates on ICC T20 Worldcup 2022 and CWG 2022 check out the Schedule, Live Score and Medals Tally. Like us on Facebook or follow us on Twitter for more sports updates. You can also download the NDTV Cricket app for Android or iOS.