Dhawan scored an unbeaten 73 to guide Sunrisers to their fourth consecutive win at the home ground. Moody, however, believes it was not a one-man show. 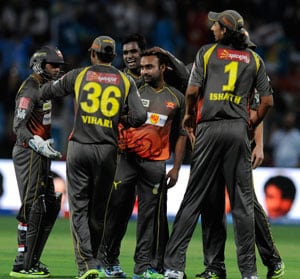 Sunrisers Hyderabad coach Tom Moody was all praise for his bowlers and batsmen after the team defeated Mumbai Indians by seven wickets in their IPL match in Uppal, Hyderabad on Wednesday.

He was pleased with the way the batsmen responded, saying a lot of effort and work had gone into this during the last few days.

"I suppose we completed our game. We were playing well with ball and field but batting needed to improve and the way players responded today I couldn't have asked for more particularly in such an important game against Mumbai," he said after the match.

Moody described Shikhar Dhawan as a class player and said the most important thing for the team was that he stayed there till the end.

Dhawan scored an unbeaten 73 to guide Sunrisers to their fourth consecutive win at the home ground. Moody, however, believes it was not a one-man show.

"We had got two important partnerships tonight. Kumar Sangakarra played very well. Vihari also responded very well at number four. The coach said they executed their plans well on the field," he said.

"We talked about improving and finishing off the inning. The death bowling was good. The way Ishant responded particularly after the no-ball six, the way he came back shows his character and the class," he said.

Moody said the wicket was more than what Mumbai posted. "It was 140-150 wicket. You got to give credit where it is due. Our bowling and fielding was very good today. You don't often see Pollard facing dot balls and not scoring runs," he added.