Speaking to the media on Thursday, Srinivasan said the spot-fixing allegations against Sreesanth, Ankit Chavan and Ajit Chandila will not tarnish the image of IPL. 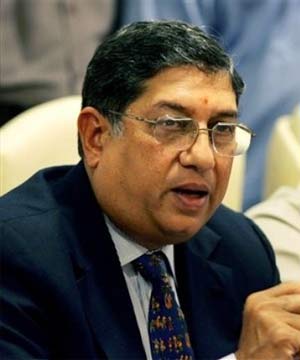 The spot-fix scandal that rocked the ongoing Indian Premier League following the arrest of pacer S Sreesanth and two other Rajasthan Royals players has come as 'a bolt from the blue"' for BCCI president N Srinivasan.

"I don't know about others, but I was shocked. It was a bolt from the blue. The BCCI is shocked that this has happened because we never expected this," the Board chief told reporters here from Kodaikanal via a video conference.

Sreesanth and two of his Royals teammates - Ankeet Chavan and Ajit Chandila - were arrested early this morning on charges of spot-fixing.

A special cell of the Delhi police arrested Sreesanth, Chandila and Chavan after their team's IPL match against Mumbai Indians at the Wankhede stadium here last night.

"Here as you see the people involved are Ranji Trophy players and one of them is a Test player. That is what is shocking," the Board chief said.

Srinivasan brushed aside criticism in some quarters that the cash-rich IPL was primed for such a scandal and said "I don't subscribe to the view that it's not surprising".

The Board chief assured the cricket fans that the 'strictest possible action' would be taken against the trio who have been charged with spot-fixing by the Delhi police -if they are found guilty.

"We will do whatever is necessary. The sport is clean and we are running it clean. We have taken all the steps (to keep it clean). One or two bad eggs here and there cannot sully the entire game," he said.

"We have taken a lot of time and energy to educate the players and have set up our own anti-corruption unit to keep the game clean. We will not hesitate to take the strictest action against anybody who is found indulging in such corrupt practices," he added.

"The governing council of IPL has already taken a decision to suspend these three players. We are saddened because last year there was an incident and the BCCI acted swiftly and strictly," Srinivasan pointed out.

"We don't have the FIR in sight and don't know what it says," he said.

The cricketers and bookies have been charged under sections 420 (cheating) and 120B (criminal conspiracy) of the Indian Penal Code and are being flown to Delhi for further questioning.

The BCCI chief rued that in spite of the hefty compensation that the players are getting now, some of them are indulging in corrupt practices because of "greed".

"Indian players are paid extremely well paid. I don't think it is a case of players not having enough money. You can call it greed and not a question of inadequate compensation."

Saying the Board will have to re-examine what more can be done to stop players from indulging in corruption, Srinivasan referred to last year's incident when five domestic cricketers were banned for spot-fixing and was surprised it had not acted as a deterrent.

"We thought when we made an example last year (by banning five domestic cricketers involved in spot-fixing), we thought the message was clear and people would not do anything like this. We have involved the ICC's Anti corruption unit. We have our own anti corruption unit and cannot take a broad brush and tarnish everyone.popeoff

"We will not lose faith. The efforts that we are taking. particularly the action that we are taking against these players, would be sufficient deterrent for anybody to try and do it in the future," the Board chief said. "We will take whatever steps are necessary to convince people to understand that this is a very serious matter and can get them into a lot of trouble. We will examine all possible approaches to this problem," Srinivasan said.

Srinivasan dismissed suggestions that the future of the cash-rich T20 tournament looked in doubt now.

"There is a lot of work for us to do. We will not leave any stone unturned. But I do not subscribe (to the view) that IPL is untenable.

"As far as these three players are concerned and keeping in mind natural justice has to be preserved, we will take action as per our rules and our own disciplinary procedures.

"We, as BCCI, need to examine the scene objectively, what else we can do and demonstrate that this kind of action does not pay," he remarked further.

Asked whether any other player, including from overseas, could be involved, Srinivasan said the Board did not have any such knowledge presently.

"As far as the comment about other cricketers, we have no information from the police. I hope nobody else is involved. If the information comes to the attention of BCCI we will of course act immediately," he said.

Srinivasan also pointed out that the Board had taken prompt action soon after the police had arrested the three Rajasthan cricketers.

"We acted the moment we got the information that Delhi police had arrested them and an FIR has been filed. The mere fact that the players have been arrested and booked under certain sections was sufficient for the BCCI to act immediately," he said.

Srinivasan also complimented Rajasthan for their statement assuring they had zero tolerance towards corruption in the game.

"They have also issued a statement saying they have zero tolerance to corruption and we are glad to see that," the BCCI chief said.

Comments
Topics mentioned in this article
Cricket IPL 2013 BCCI Sourav Ganguly Sreesanth
Get the latest updates on ICC T20 Worldcup 2022 and CWG 2022 check out the Schedule, Live Score and Medals Tally. Like us on Facebook or follow us on Twitter for more sports updates. You can also download the NDTV Cricket app for Android or iOS.