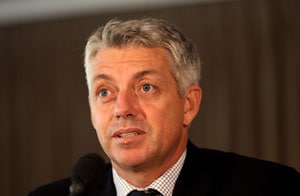 The ICC today (May 16) said it will provide "full support" to the BCCI and Delhi police in the investigation into the arrest of three cricketers, including S Sreesanth, for their alleged role in spot-fixing in the ongoing Indian Premier League.

"The ICC will provide full support to the BCCI and Delhi Police in this investigation. The BCCI's decision to suspend its three cricketers on corruption charges is a clear indicator of the ICC and its Members' zero-tolerance approach," ICC Chief Executive David Richardson said.

Indian pacer S Sreesanth and two other bowlers from Rajasthan Royals team were arrested in a post-midnight operation in Mumbai today by Delhi Police for spot-fixing IPL matches for payments of upto Rs 60 lakhs just for giving away pre-determined number of runs in an over.

Richardson said the ICC has undertaken measures to impose strong penalties on those found to be guilty.

"The ICC and its Members have collectively taken measures to tighten vigilance, strengthen our anti-corruption codes and increase player education programmes as well as offering strict penalties to those found guilty of illegal conduct.

"As such, it is disappointing to see that despite the extensive education programmes delivered by the ICC and the BCCI, there still appears to be some players who remain vulnerable to temptations.

"We have always maintained that the real battle is against the unscrupulous individuals who are preying on the susceptible players."

Y P Singh, Head of ICC's Anti-Corruption and Security Unit (ACSU), said: "Over the last 12 months or so, we have seen far more examples of players doing the right thing and reporting approaches."

They are also likely to be booked under the stringent MCOCA, Maharashtra Control of Organised Crime Act, which could land them in jail without bail and their confessions before a DCP level officer will be admissible in court.

"This is extremely encouraging and allows us to have the confidence to believe that the vast majority of players are playing the game in the right.

"This incident emphasises the threats all players face and need for the anti-corruption units of the ICC and its Members to work even closer with the various law enforcement agencies around the world who have the necessary investigatory authority and resources.

"We welcome the police's involvement to root out these corrupters," he added.

The arrested cricketers and the bookies were sent to police custody for five days by a court here for being quizzed in connection with the case.

Comments
Topics mentioned in this article
Cricket IPL 2013 MS Dhoni Ankeet Chavan Sreesanth Ajit Chandila Rajasthan Royals David John Richardson
Get the latest updates on India vs South Africa and check out  Schedule, Results and Live Score. Like us on Facebook or follow us on Twitter for more sports updates. You can also download the NDTV Cricket app for Android or iOS.