Another great Barry Richards, commenting on Pollock's reaction, said once a player crosses 34, he can buy another 3-4 years on experience but not more. 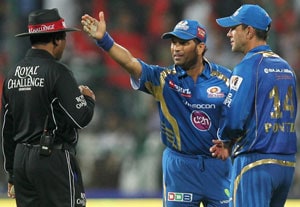 Sad at not seeing Sachin Tendulkar and Ricky Ponting perform well in the Indian Premier League (IPL), South African cricketing legend Graeme Pollock said it is always a hard decision to know when to call it a day.

While Mumbai Indians skipper Ponting has already retired from international cricket, Tendulkar quit One-Day Internationals (ODI) in December last year. Tendulkar's woeful form in Tests carried on to the IPL as well. In five matches, Tendulkar, who will turn 41 Wednesday, has managed scores of 23, 0, 1, 44, 1. Ponting has also been a big failure and had figures of 28, 6, 0, 14 and 4.

Pollock was surprised to see that the Mumbai Indians' opening pair of Tendulkar and Ponting isn't getting runs.

"I am watching the IPL with interest, just a little bit sad that the great players Tendulkar and Ponting haven't really hit it off. It is always a hard decision to know when to get out," Pollock said on his Facebook account.

Another great Barry Richards, commenting on Pollock's reaction, said once a player crosses 34, he can buy another 3-4 years on experience but not more.

"Is sad but well remember when reactions slow around 34 then u can get by for 3/4 more years on experience but eventually the decision has to be made cruel but true!" Richards commented.

Comments
Topics mentioned in this article
Cricket Sachin Ramesh Tendulkar IPL 2013 Ricky Ponting Robert Graeme Pollock
Get the latest updates on IPL 2020, check out the IPL Schedule for 2020 and Indian Premier League (IPL) Cricket live score . Like us on Facebook or follow us on Twitter for more sports updates. You can also download the NDTV Cricket app for Android or iOS.