Twitteratis and Facebook users have heaped praise on the 18-year-old prodigy from Kerala who was signed by Kolkata Knight Riders last season, but didn't get a game. 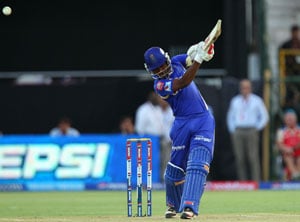 RR fans have a soft spot for the new kid on the block. From his arrival on the pitch to his dismissal, Samson receives adulation across social networks.

Twitteratis and Facebook users have heaped praise on the 18-year-old prodigy from Kerala who was signed by Kolkata Knight Riders last season, but didn't get a game.

"He is the new generation Rahul Dravid," said a post on the Sanju. V. Samson page while some have likened the middle-order batsman to a "mixture of Sachin (Tendulkar) and Rahul (Dravid)".

Keralites are ecstatic with their new "superstar".

"Thanks a lot Sanju. People of Kerala have waited a very long time for such a good cricketer. Our prayers will always be with you," commented a fan.

A minnow among giants, Samson is already being touted as a future Indian star.

"How well that 18-year-old is playing....Sanju v samson...Its a treat to watch such classy players," complimented a fan.

Similarly, Twitteratis have been chirping away compliments for Sanju.

Even fans of rival teams acknowledge Samson's talent with tweets saying "He must be dismissed early. He is dangerous."

Comments
Topics mentioned in this article
Cricket Sachin Ramesh Tendulkar IPL 2013 Rahul Dravid Sreesanth Rajasthan Royals
Get the latest updates on ICC T20 Worldcup 2022 and CWG 2022 check out the Schedule, Live Score and Medals Tally. Like us on Facebook or follow us on Twitter for more sports updates. You can also download the NDTV Cricket app for Android or iOS.