Siddharth Trivedi has made the Sawai Man Singh Stadium in Jaipur his home for the past six years, producing consistent performances for the Rajasthan Royals as they punch above their weight. 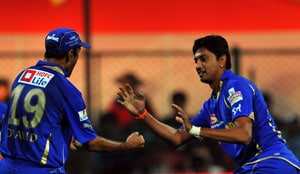 A little over 10 years ago Siddharth Kishorkumar Trivedi was on the selectors' radar for the Indian national team. His medium pace had earned him a spot in the Under-19 squad for the 2002 World Cup, where he took nine wickets in seven games.

Labeled a promising youngster, Trivedi earned the Border-Gavaskar Scholarship, which allowed him to train for five weeks at an academy in Australia. At the academy Trivedi was acquainted with Shaun Tait - his future Rajasthan Royals' teammate. On his return to India, Trivedi was drafted in to the India B squad for the Challenger Trophy in 2003.

A consistent performer on the domestic circuit since his debut in 2002, Trivedi currently plays for Saurashtra in the Ranji Trophy. In 78 first-class games, he has an impressive 260 wickets with a best of 6/32.

Despite consistent showings in first-class and list A cricket, Trivedi has never been awarded an India call-up. However in 2008, Trivedi became a household name across India. Drafted in to the Rajasthan Royals squad for the inaugural season of the Indian Premier League, he took 13 wickets in fifteen games as the Royals surprised all by winning the title. His shining moment came during a victory over the Mumbai Indians, where Trivedi took the wickets of Sanath Jayasuriya and Sachin Tendulkar.

Trivedi has stuck with the Royals for the next five years in the IPL, taking 65 wickets in 6 seasons. During the 2013 season, Rajasthan were in turmoil after 3 of their players - S Sreesanth, Ajit Chandila and Ankeet Chavan - were arrested on allegations of spot-fixing.Â  Sidharth Trivedi was made a prosecution witness in IPL spot-fixing scandal and deposed in court.

Trivedi shares a special bond with his father, Kishore, who is his coach and idol. Kishore Trivedi was a Ranji Trophy player, who taught two things to Siddharth - 'discipline' and 'faith'. "He gave me wings to fly and the ability not only to dream but to achieve them as well," said Siddharth about his father. "Today, I owe my success to my dad, who has become the cornerstone of my life."

At 30 years of age, an India call-up for Siddharth may seem a bit far-fetched. But the pacer has not given up hope just yet. "I still believe I will complete my journey and play for India soon."

Comments
Topics mentioned in this article
IPL 2013 Cricket Sreesanth Shaun Tait Shane Warne Siddharth Trivedi Rajasthan Royals
Get the latest updates on Fifa Worldcup 2022 and check out  Fifa World Cup Schedule, Stats and Live Cricket Score. Like us on Facebook or follow us on Twitter for more sports updates. You can also download the NDTV Cricket app for Android or iOS.