When asked what he would do on May 7 when Kolkata Knight Riders take on Mumbai Indians at the Wankhede stadium, Shah Rukh said, "I don't want to sound politically incorrect but what will they do if I enter? Shoot me?" 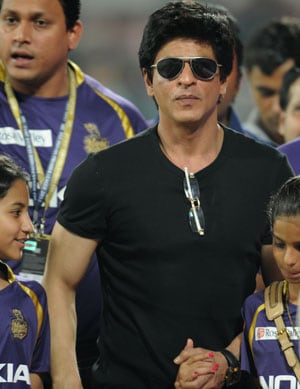 Kolkata Knight Riders' owner Shah Rukh Khan has admitted that he should not have got into a fight with the Wankhede stadium security guard during last season's IPL that led to MCA imposing a five-year ban on him.

"In retrospect, I should not have behaved like that. On the other hand, it's not something that I really think about. It's quite cool," said Shah Rukh.

Asked what would he do on May 7 when KKR take on Mumbai Indians at the Wankhede stadium, Shah Rukh said, "I don't want to sound politically incorrect but what will they do if I enter? Shoot me?"

Shah Rukh also joked that he might resort to wearing masks to deceive the authorities.

"I don't know...otherwise it has to be the masks, I'll have to wear them with a false moustache and stuff like that. But I am not going to take any chances. I will wait outside the Wankhede and cheer for my boys.

"As long as my team is allowed inside the Wankhede Stadium, it's fine. We will win the match. I don't need to be there to win the match," he said during a late night programme at the team hotel.

Shah Rukh, in fact entered the KKR dressing room during the break in a clear violation of the protocol.

"It's my face...people stop me from going to lot of places in stadiums nowadays. In our team, Brett Lee looks the most well-behaved, so I'll wear his mask and enter the dressing room.

"I just wanted to tell Gambhir well done at halftime. I am sorry, it's my mistake. I forget the rules sometimes. I will try not to do it again, so that I'm not banned from here," an apologetic Shah Rukh added.

Comments
Topics mentioned in this article
Cricket Shoaib Akhtar IPL 2013 Sourav Ganguly Kolkata Knight Riders Mumbai Indians Ajaysinhji D. Jadeja Shah Rukh Khan
Get the latest updates on India vs South Africa and check out  Schedule, Results and Live Score. Like us on Facebook or follow us on Twitter for more sports updates. You can also download the NDTV Cricket app for Android or iOS.