Many Sri Lankans have under-performed in the Indian Premier League, but the 'Matara Marauder' is confident that the national team would be able to do well in next month's Champions Trophy in England and Wales. 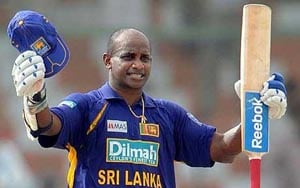 Sri Lanka's national chief selector Sanath Jayasuriya on Friday said he was concerned after Angelo Mathews was dropped as skipper of struggling Pune Warriors in the ongoing Indian Premier League.

"It is unfortunate that Angelo was dropped as a captain. I think this was a concern for myself being chairman of selector (of Sri Lanka Cricket). He is the Sri Lankan captain in Tests and one-dayers. It was unfortunate. But Angelo has played enough cricket to realise that these things happen in your life. When you play for a franchise, these things happen," Jayasuriya told PTI here.

Asked how Mathews would lead the national side, the former opener said, "You can't go by his Pune Warriors performance. He is a different kind of player. We have a lot of faith in him. He's a very good player and good captain. You can't expect him to do well all the time."

Jayasuriya was in the city to promote his country as the brand ambassador of Sri Lanka tourism.

Many star players from Sri Lanka have under-performed in the T20 tournament, but the 'Matara Marauder' is confident that the national team would be able to do well in next month's Champions Trophy in England and Wales.

"But we can only request them. We can't force (them to release players). They are under contract with their franchises. We are playing a tri-series tournament in Sri Lanka next week and that is why we wanted them to get match practice before they go to England," he said.

"They have played enough cricket. They are experienced players to comeback and play good cricket. Not all of them (have done well). Kumar (Sangakkara) has come back and started to play good cricket. Sachithra (Senanayake) has been bowling well," the 43-year-old said.

"You can't expect all the IPL players to do well. You can have 8-9 players out of form. It doesn't matter. As long as they work hard, they need just one innings to make a comeback. We have faith in them," Jayasuriya added.

He pointed out that it is not just Sri Lankan players who are out of form but senior Indian players as well.

"Any cricketer will go through these patches. Not only Sangakkara, Mahela Jayawardene, Angelo Mathews. If you see the Indian team, a lot of senior players and a lot of experienced players have been dropped. That is part of cricket."

He was confident the Lanka squad for the Champions Trophy, a mixture of experienced players and youngsters, would do well.

"I picked the best team at the moment, so I hope they do well. We have the best experience of players. I didn't want to risk by playing too many young players and got a mix of experienced players also, because of the conditions."

Jayasuriya felt India have a good chance in the eight-team tournament but need to adapt themselves to the conditions over there.

"They have a good chance but you are playing in England, so you need to adjust yourself quickly."

The former Lanka captain, who played for Mumbai Indians in the first three editions of IPL, described the time he spent with senior India cricketer Sachin Tendulkar as memorable.

"That was the best time for me to go into the middle with Sachin and represent in IPL. It was great."

Jayasuriya was of the opinion that swashbuckling Indian opener Virender Sehwag, who has been dropped, will return to the Indian squad.

"He was always a great cricketer and is going through a bad patch. He has to come out of the situation and he will definitely come out. It takes time but he will come back."

He termed the decision of not allowing Sri Lankan cricketers to play in Chennai during IPL as unfortunate and said sports should not be mixed with politics.

"This time IPL got little bit affected because of these political issues. Sports should not be involved with politics but it is an unfortunate thing. It was a bit disappointing when sports come into these situations.

"Sri Lanka always treats everyone the same. We never had any issues with Chennai people coming to Sri Lanka. We treat them like brothers and sisters and we will continue to do that," he maintained.

Comments
Topics mentioned in this article
Cricket ICC Champions Trophy 2013 IPL 2013 Sanath Jayasuriya Angelo Mathews Pune Warriors India
Get the latest updates on ICC T20 Worldcup 2022 and CWG 2022 check out the Schedule, Live Score and Medals Tally. Like us on Facebook or follow us on Twitter for more sports updates. You can also download the NDTV Cricket app for Android or iOS.