From being a first-class hero in Sri Lanka to being called for a questionable action while on tour to England to earning US$ 625,000 in the IPL auctions, it's been an interesting journey for Senanayake. 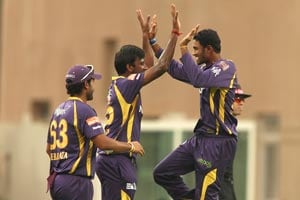 Sachithra Senanayake, the Kolkata Knight Riders offspinner, might not have become a huge star in his first Indian Premier League season, but he has certainly made a mark by picking up wickets and maintaining an economy rate of under seven-an-over. From being a first-class hero in Sri Lanka to being called for a questionable action while on tour to England to earning US$ 625,000 in the IPL auctions, it's been an interesting journey for Senanayake. Wisden India caught up with him for a candid chat. Excerpts:

Your first time in the IPL, Sachithra, how has the experience been?

It's the biggest Twenty20 tournament in the world and I am lucky to play for KKR, with legends like Jacques Kallis and Brett Lee, who have so much experience. It's been great. I have met such big cricketers and spent time with them - I can't imagine anything better.

Being with Kolkata must have been especially beneficial, seeing that their plans are made around their slower bowlers?

Yes, but I've been told that last year the Eden Gardens pitch was turning much more. It's not been that good this year. It's slow, but not spinning much and that's why we have played two spinners only sometimes. If only one spinner plays, it's obviously going to be Sunil (Narine). He's such a great spinner, so I can't always play. I think I have done well except in the Mumbai Indians game (1 for 50 in four overs) at Eden Gardens. Obviously, a spinner will prefer a pitch that helps spin, but it's not been too bad for me because I don't turn the ball much anyway. But when the ball spins, batsmen are more careful.

Spending so much time with Narine must also have been a good experience?

Oh yes, we are good friends even though we met for the first time when we both came here. He's very quiet but he is a great guy. He's very different in terms of his grip and everything else. He knows what he wants to do when he is bowling. He's always asking me to not think too much, he says that I shouldn't worry about what the batsman is doing but focus on my deliveries. I might get hit for two sixes but I only need one ball to get the batsman out, so I should focus on bowling my best ball at all times. So he asks me not to worry if I am being attacked.

In Kolkata, with Narine around, you might never be the No. 1 spinner. Is that something that bothers you?

Yes, I want to be the main spinner. I prefer that a lot more. Not because of my ego, but because being the No. 2 spinner means you will miss matches. I haven't played half the matches we played. If you are not the No. 1 spinner, you can't establish yourself, which I need to do at this stage of my career.

What is a mystery spinner and why are you known to be one? Is it your grip?

(Laughs) Not the grip, but me. I can bowl the offspin and the doosra and I can also get the ball to drift, both ways, which I can control. So maybe that's why I am being called a mystery spinner.

But surely experienced batsmen can read those things?

At the delivery point, because I am tall and have a high-arm action, batsmen sometimes get fooled because of the trajectory as well as the variations. Also, in Twenty20s, we both, Sunil and I, vary our pace and lengths. Every team has good hitters, so there are little plans that we work out. For example, if we bowl two or three dot balls, the idea should be to give them a single off the next ball because chances are that he will hit you for a six otherwise. So it's not only about whether the batsman can read you, but also about whether you can out-think the batsman. In any case, it's not us cricketers who call ourselves mystery spinners or anything else.

Would you say there are mystery batsmen too, the ones who can manufacture shots and fool the bowlers?

Yeah, people like AB (de Villiers) and Mahela (Jayawardene) and (Tillakaratne) Dilshan, they create shots. So against them we have to think a lot more. With Chris Gayle, it's different because he is trying to hit through the line each time, and with him, you know what he is trying to do. You can't keep the ball within his reach. With AB and that sort of batsman, you have to out-think them and vary your delivery at the last moment at times because they play a lot of premeditated shots.

Away from Twenty20 cricket, you have also had a brilliant first-class career, haven't you?

Yeah, but before that I was on the bench for three years waiting for a first-class match. I joined SSC (Sinhalese Sports Club) in 2004 but only got my first match in 2006 when I played three matches and got 15 wickets. Since then I have been a regular. I have usually picked up a lot of wickets. Then I got a chance to play in the Big Bash League with Sydney Sixers, where Trevor Bayliss is the coach. Sunil Narine had to leave and I got a chance for the last couple of matches. I bowled well there. I bowled a lot in the Power Play overs and maybe that's why I got a chance in the IPL.

Being a spin bowler in Australian conditions must have been even tougher?

Well, there is more bounce, so because of my height, I am not easy to pick up even if the pitch is not helping me. Also, foreign players are not very good against spin like subcontinent players. So it worked.

Coming to international cricket, what do you think you have to do to establish yourself, maybe even play Test cricket?

Oh, I don't know. There are others behind me, like (Akila) Dananjaya. Rangana Herath is the No. 1 spinner and there's also Ajantha (Mendis). The advantage I have over the younger spinners is that they are not experienced yet, they haven't played enough first-class cricket yet. At the moment, they are behind me, but if I don't keep doing different things, they will catch up.

In Sri Lanka, the selection processes are also unpredictable. I was dropped from the T20 World Cup team. So I have to keep doing different things. Though the new selection panel, with Sanath Jayasuriya, is great. Sanath has spoken to me a few times. With him, I know where I stand and what the selectors are thinking when it comes to me.

I want to improve my batting too, so that I can become an allrounder. There are some big guns at SSC, so I don't always get a chance to bat. I have scored a few runs, but I want to improve, because I want to play Test cricket, that is the game. But Rangana Herath is the man. I need to do more to have a chance. We need a partner for Herath. I think I can be that partner for him.

Playing in the IPL, the BBL, the SLPL (Sri Lanka Premier League) for so many months of the year, it can't be easy to switch to first-class cricket ...

It's not easy. Everything is so different. In Tests, you have much more time. In Twenty20s, dot balls are the most important. Not giving runs is the main thing. Just 24 balls and you need to watch your economy rate more than anything else.

But the money is good, isn't it?

I really wanted to buy a jeep. I haven't yet, but that's what I want. I want to drive around Sri Lanka in a jeep. I have already shifted to a new house, where I have spent just two-three days in three months because I have been travelling so much. The rest I need to save. Who knows what will happen tomorrow. I hope I get a team in the IPL next year.

You are in the Sri Lankan team for the Champions Trophy. What are your thoughts about Sri Lanka's chances in England?

We have a decent chance, I think. We have good fast bowlers - (Chanaka) Welegedera, (Nuwan) Kulasekara, (Shaminda) Eranga and (Lasith) Malinga as well as Angelo Mathews and Thisara Perera. And we have a good batting line-up. We have the spinners. Our morale is good. It will depend on the batsmen. If we can bat well....

I played there with the Sri Lanka A team in 2011. I got a few wickets in the four-day matches, even against England Lions. It's not too tough to bowl in England though it doesn't turn much. Herath is our main spinner, but I hope to get a chance.

That's when questions against your action were raised...

Yeah, that was a bad incident. In England, if that happens, you can't play for two weeks, so I returned. The report went from the England Lions coaching staff. I had to change my action a bit, my run up and arm swing. It was (Muttiah) Muralitharan who helped me. He went to the board (Sri Lanka Cricket) and asked them to help me. He told them that if the board didn't help me, he would. It's after that that the board reacted and sent me to Perth (to the University of Western Australia). I went to Perth and I was cleared, so I got the report and now I am free. It's because of him that I am here.

Murali is a hero to all young cricketers in Sri Lanka, isn't he?

Oh yes, he is a god. I got close to him after the incident. He has so much experience and he has done everything. He has helped me with my run up, he helped me work out the distribution of my bodyweight when bowling, my jump, my control ... my coach Piyal Wijetunga and Murali worked together and helped me a lot, as did (Romesh) Kaluwitharana, the A team coach.

You're 28 now, Sachithra, what's the plan for the future - more T20s and money or a few Test matches too?

Both. I have just started. I have to play more and more for the national team. The T20 tournaments are also important. But I want to play international cricket, Tests and everything else.

Comments
Topics mentioned in this article
Cricket IPL 2013 Shoaib Akhtar Kolkata Knight Riders Ajaysinhji D. Jadeja
Get the latest updates on ICC T20 Worldcup 2022 and CWG 2022 check out the Schedule, Live Score and Medals Tally. Like us on Facebook or follow us on Twitter for more sports updates. You can also download the NDTV Cricket app for Android or iOS.